Nuclear Power Plant Diagram – With the end of coal reserves in sight in the not too distant future, the immediate practical alternative source of large scale electric energy generation is nuclear energy. In fact, the developed countries have already switched over in a big way to the use of nuclear energy for power generation.

In India, at present, this source accounts for only 3% of the total power generation with nuclear stations at Tarapur (Maharashtra), Kota (Rajasthan), Kalpakkam (Tamil Nadu), Narora (UP) and Kakrapar (Gujarat). Several other Nuclear Power Station will be commissioned by 2012. In future, it is likely that more and more power will be generated using this important resource (it is planned to raise nuclear power generation to 10,000 MW by the year 2010).

When Uranium-235 is bombarded with neutrons, fission reaction takes place releasing neutrons and heat energy. These neutrons then participate in the chain reaction of fissioning more atoms of 235U. In order that the freshly released neutrons be able to fission the uranium atoms, their speeds must be reduced to a critical value. Therefore, for the reaction to be sustained, nuclear fuel rods must be embedded in neutron speed reducing agents (like graphite, heavy water, etc.) called moderators

.For reaction control, rods made of neutron-absorbing material (boron-steel) are used which, when inserted into the reactor vessel, control the amount of neutron flux thereby controlling the rate of reaction. However, this rate can be controlled only within a narrow range. The schematic diagram of a Nuclear Power Plant Diagram is shown in Fig. 1.7. The heat released by the nuclear reaction is transported to a heat exchanger via primary coolant (CO2, water, etc.). Steam is then generated in the heat exchanger, which is used in a conventional manner to generate electric energy by means of a steam turbine. Various types of reactors are being used in practice for power plant purposes, viz., advanced gas reactor (AGR), boiling water reactor (BWR), and heavy water moderated reactor, etc. 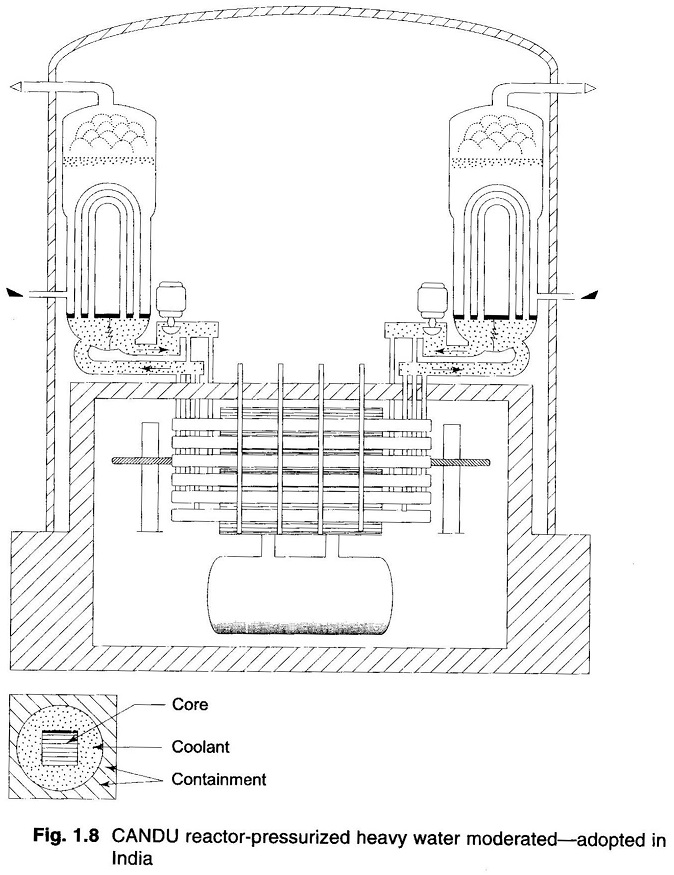 The associated merits and problems of nuclear power plants as compared to conventional thermal plants are mentioned below.

The world uranium resources are quite limited, and at the present rate may not last much beyond 50 years. However, there is a redeeming feature. During the fission of 235U, some of the neutrons are absorbed by the more abundant uranium isotope 238U (enriched uranium contains only about 3% of 235U while most of its is 238U) converting it to plutonium (239U), which in itself is a fissionable material and can be extracted from the reactor fuel waste by a fuel reprocessing plant. Plutonium would then be used in the next generation reactors (fast breeder reactors FBRs), thereby considerably extending the life of nuclear fuels. The FBR technology is being intensely developed as it will extend the availability of nuclear fuels at predicted rates of energy consumption to several centuries.

Figure 1.9 shows the schematic diagram of an FBR. It is essential that for breeding operation, conversion ratio (fissile material generated/fissile material consumed) has to be more than unity. This is achieved by fast moving neutrons so that no moderator is needed. The neutrons do slow down a little through collisions with structural and fuel elements. The energy density/kg of fuel is very high and so the core is small. It is therefore necessary that the coolant should possess good thermal properties and hence liquid sodium is used. The fuel for an FBR consists of 20% plutonium plus 8% uranium oxide. The coolant, liquid sodium, leaves the reactor at 650°C at atmospheric pressure. The heat so transported is led to a secondary sodium circuit which transfers it to a heat exchanger to generate steam at 540°C. With a breeder reactor the release of plutonium, an extremely toxic material, would make the environmental considerations most stringent.

An experimental fast breeder test reactor (FBTR) (40 MW) has been built at Kalpakkam alongside a Nuclear Power Plant Diagram. FBR technology is expected to reduce the cost of electric energy so as to compare favourably with that of conventional thermal plants. 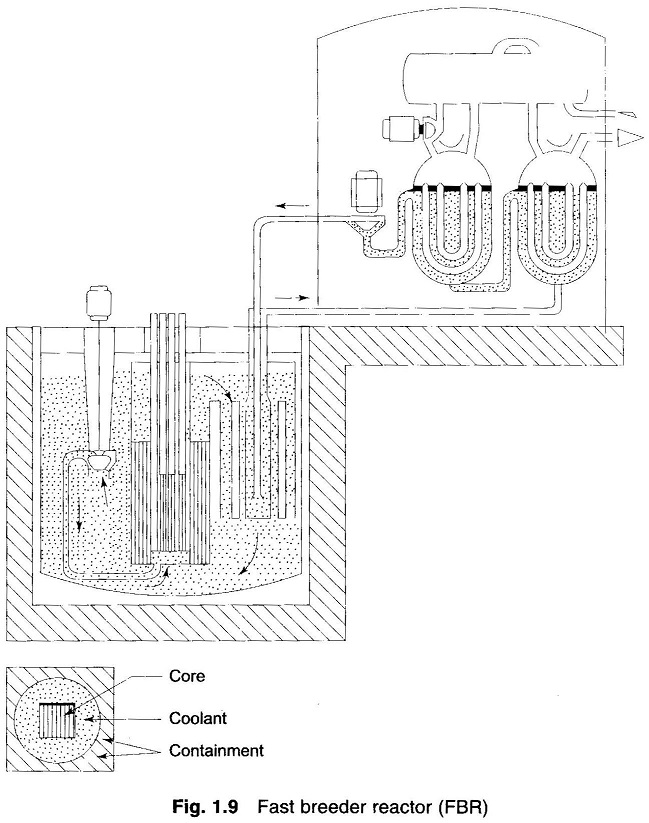 An important advantage of FBR technology is that it can also use thorium (as fertile material) which gets converted to 233U which is fissionable. This holds great promise for India as we have one of the world’s largest deposits of thorium—about 450000 tons in form of sand dunes in Kerala and along the Gopalpur Chatrapur coast of Orissa. We have merely 1 per cent of the world’s coal resources and some traces of oil and gas. Thus, nuclear energy is best suited for India, with poor quality coal, inadequate hydro potential, plentiful reserves of uranium (70,000 tons) and thorium, and many years of nuclear engineering experience. The present cost of Nuclear Power Station, comparable with coal-fired power plant, can be further reduced by standardising plant design and shifting from heavy water reactor to light water reactor technology.