Uranium exists in different isotopes of U238, U234 ,  and U235. Out of these, U235 is the most unstable. When unstable heavy nucleus is bombarded with high energy neutrons, it splits up roughly into two equal fragments and about 2.5 neutrons are released and a large amount of energy is produced (nearly 200 million electron volts). This process is called Nuclear fission. 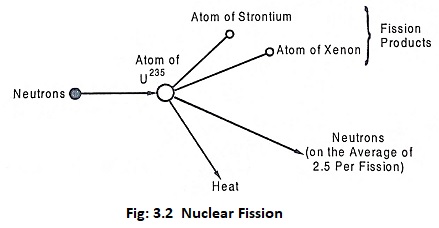 Out of 2.5 neutrons released is fission of each nuclei of U235, one neutron is used to sustain the chain reaction, about 0.9 neutron is captured by U238 which gets converted into fissionable material, Pu239. And about 0.6 neutron is partly absorbed by control rod material, coolant moderator, and partly escape from the reactor.

Similarly, if thorium is used in the reactor core, it produces fissionable material U233.

Thus, Pu239 and U233 are fissionable materials and they can be used as nuclear fuel and are known as secondary fuel, and U235 and Th232 are known as primary fuels.

The chain reaction produces constant rate of heat energy and it may continue only if the neutron liberated by fission, balance the disposal of neutron by different ways as given below.