Direct-Coupled Switching Circuit – When a transistor is used as a Biasing Transistor Switching Circuits, it is either biased off to IC = 0, or biased on to its maximum collector current level. Figure 5-53 illustrates the two conditions. Note that the circuit in Fig, 5-53 is termed a direct-coupled switching circuit, because the signal source is directly connected to the circuit. In Fig. 5-53(a) the negative polarity of the base input voltage (VS) biases the transistor (Q1) off. In this case, the only current flowing is the collector base leakage current (ICBO) which is normally so small that it can be neglected.

The transistor collector-emitter voltage is,

In Fig. 5-53(b) VS is positive, and it biases Q1 on to the maximum possible IC level. The collector current is limited only by the collector supply voltage (VCC) and the collector resistor (RC). So,

Now consider Fig. 5-54, which shows the output characteristics and dc load line for the Biasing Transistor Switching Circuits in Fig. 5-53. The load line is drawn by the usual process of plotting point A at (IC= 0 and VCE = VCC), and point B at (VCE = 0 and IC = VCC/RC).

The region of the transistor characteristics at (VCE(sat)) is termed the saturation region. The region between saturation and cutoff is the active region, which is where a transistor is normally biased for, amplification. From the load line, it is seen that VCE(sat) is dependent upon the IC level. For the 2 kΩ load line shown dashed in Fig. 5-54, VCE(sat) is smaller than for RC =1 kΩ.

Also, the level of IC depends upon IB, 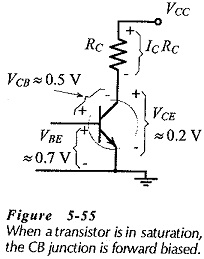 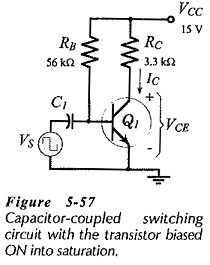 The base bias circuit in Fig. 5-57 is similar to circuits of that type that have already been considered, with the exception that the transistor is biased into saturation. Although too unpredictable for biasing amplifier circuits, base bias is quite satisfactory for Biasing Transistor Switching Circuits. The transistor in Fig. 5-57 is in a normally-on state with VCE = VCE(sat). The capacitor-coupled (pulse waveform) input turns the device off, giving VCE = VCC.

The transistor base current Is

The collector current can be determined From Eq. 5-25, and then the minimum required hFE value can be calculated from Eq. 5-27. 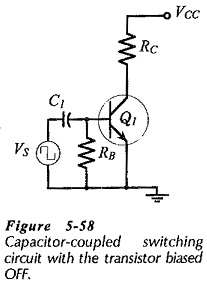 The resistance of RC for any one of the Biasing Transistor Switching Circuits discussed can be calculated by using the specified VCC and IC levels with Eq. 5-25. The transistor hFE(min) value can be used with IC to determine the minimum IB level required for transistor saturation. However, concern about the actual transistor current gain can be avoided by using an hFE value of 10. It is very unlikely that the transistor will have an hFE(min) less than 10, so a circuit designed in this way will work with virtually any low-current transistor. 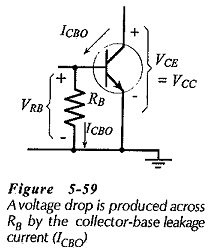 A different approach must be taken for calculating a suitable resistance for RB in the normally-off capacitor-coupled circuit in Fig. 5-58. The current that flows through RB when the transistor is off, and the allowable voltage drop across RB must be considered, (see Fig. 5-59). The resistor current is the collector-base leakage current (ICBO), and the maximum voltage drop produced by ICBO must be much smaller than the normal transistor VBE level when the device is on. ICBO at maximum transistor temperature is unlikely to exceed 5 μA, and a VRB of 0.1 V will normally keep the transistor biased off.  So, a maximum resistance value for RB is,

Typically, an RB value of 22 kΩ or lower is suitable for keeping the transistor biased off.