The building block concept of TDC 3000 Architecture control design, with distributed process controlled boxes linked together by a communication network, was first introduced by Honeywell in 1975. Today, the monitor and control boxes connected to the Data Hiway as shown in Fig. 21.77 are an integral part of the TDC 3000 Architecture. 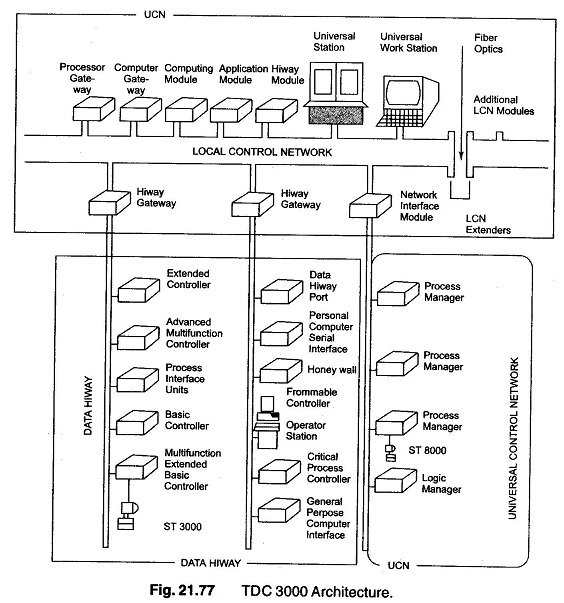 By incorporating a high speed proprietary LAN called the local control network (LCN) with associated modules that accomplish specific functions, TDC 3000 Architecture offers a product that is compatible with systems already in the fields, is fully integrated and at the same time, has flexibility to continue to change and to grow along with the processes it controls. The user need purchase only those modules required to meet plant control objectives at the time, with the assurance that increased capacity and/or functionality can be achieved later by adding the additional module as required.

An LCN has the following features:

PIU are used when a large number of process variable need to be monitroed or fed to a higher level module. They are available in low level (LLPIU), high level (HLPIU) and low energy (LEPIU) version. The levels refer to the amplitude of the signals with which the PIUs interface. The low energy PIU is configured with multiplexer boxes that can be distributed in the plant.

The various controllers used in DCS (TDS3000) is listed below along with their features.

MC controller used in DCS System Architecture, handles continuos I/O operations, logical operations and sequential control for batch operations. Each MC has the capacity to control 16 analog loops and handling up to 30 analog inputs, up to 72 analog output, up to 256 digital inputs, up to 64 counter inputs.

AMC is the modification of MC and it has the same function as MC. It takes less space and the scanning is faster than MC.

All of the above controller types can be equipped with a digital interface to Honeywell’s ST 300 smart transmitter, making it possible for the controllers to take advantage of the increased capabilities of this transmitter.

The following are the additional boxes (units) provided in a DCS System Architecture.

This unit provides an interface to any personal or mini computer with an RS-232 serial port. Typically the PC scans selected box values which could be viewed or archived into the PC files for such applications as the data analysis, customed reports and special calculations.

This section provides the interface between the TDC 3000 Architecture Data Hiway and any computer having general purpose I/O adapter. It has 16-bit parallel communication.

This consists of a Logic Control system (LCS) and IPC620 line of programmable controllers. It can perform logic and interlock function.

US is a Universal Window through which the operator monitors and controls the process and handles process and alarm systems. It stands on the LCN and communicates with all modules on the LCN, process connected devices on the Hiway via Hiway Gateway and UCN mode, via interface module.

It provides comprehensive facilites to the process operator, process engineer and maintenance technician on the universal window.

The following are the functions for the process operators. They have to:

The process engineer do the following.

The maintenance technicians have the responsibility to

The followings are the storage functions:

This control consists of an application module or AM.

AM has the following features:

This module consists of the following features: