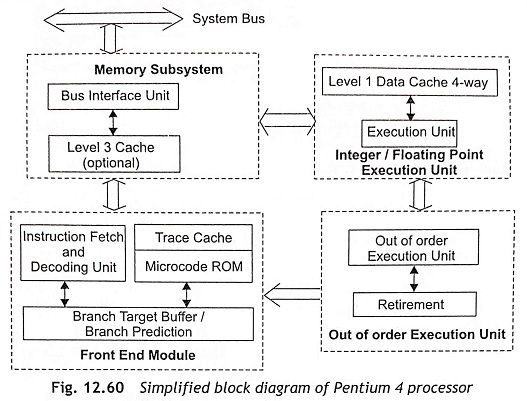 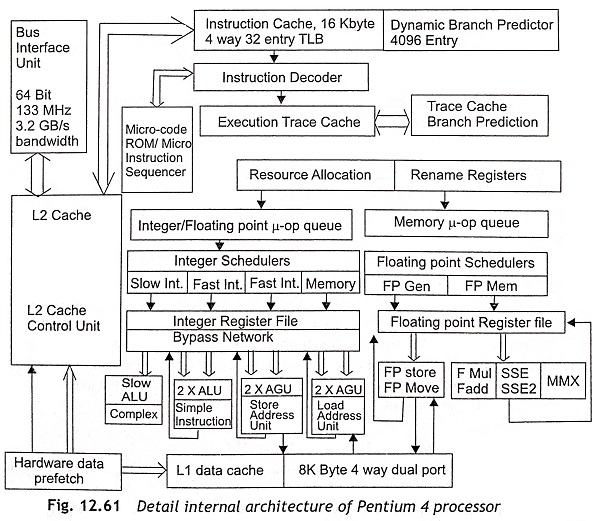 Trace Cache (TC) After translation of instructions into micro-operations (μ-ops) by using an instruction decoder, the streams of decoded instructions are fed to an L1 instruction cache, which is known as trace cache. The L1 cache can store only the decoded stream of instructions, which are actually micro-operations (μ-ops). Hence, the speed of execution will be increased significantly. In a Pentium 4 processor, the trace cache can store up to 12 K μ-ops. Normally, the cache assembles the decoded μ-ops in order of sequence, called traces. A single trace contains many trace lines and each trace line has six μ-ops.

Branch Prediction The branch prediction logic unit predicts the memory locations from where the next instruction will be fetched. Usually, the predictions are performed using the past information of the program execution. The sixth-generation Pentium processors use simple branching strategy. If the processors come across a branch instruction, the branch condition will be evaluated by complex mathematical and logical computations which require some time and the processors have to wait till the branch condition is completely evaluated. To reduce the wait time, Pentium P4 processors use the speculative execution strategy.

Register Rename The register rename logic is used to rename the registers of Intel Architecture 32-bit Pentium processors onto the machine’s physical registers. The register rename is possible in the 8 general-use IA-32 integer registers to be dynamically expanded to 128 physical registers. A Register Alias Table (RAT) is used to track the current status of registers and it is also used to inform the next instructions from where to get their input operands. As there are two logical processors in Pentium 4, there should be two RATS one for each logical processor. Usually, the register renaming process is performed in parallel to the allocator.

Rapid Execution Module  There are two ALUs (Arithmetic Logic Unit) and two AGUs (Address Generation Unit) in a Pentium 4 processor. The ALU and AGU units operate at twice the processor speed. For example, if the processor works at 1.4 GHz, the ALUs can operate at 2.8 GHz. Hence, twice the numbers of instructions are executed per clock cycle. All integer calculations such as addition, subtraction, multiplication, division and logical operations are performed in the arithmetic and logic unit. AGUs are used to resolve indirect mode of memory addressing. The ALUs and AGUs are very useful for high-speed processing.

Traditional P6 micro-architecture approaches to processor design have focused on higher clock speeds, super pipelining, Instruction-Level parallelism (ILP) and caches. Super pipelining is a way to achieve higher clock speeds by having finer granularities. By using this technique, it is possible to execute more and more instructions within a second. As there are far more instructions in-fly, handling such events like cache misses, interrupts and branch-miss prediction will be costly. The instruction-level parallelism technique is used to increase the number of instructions executed within a cycle. The superscalar processor has multiple parallel executions units for different instruction sets. The main problem is to find enough instructions for execution, Therefore, the out-of-order execution has been accepted where this new technique has additional burden on the system design. A cache hierarchy is used to reduce the latency originating from memory accesses where smaller and faster units arc located closer to the processor than the bigger and slower ones. Although fast memories are used in the system, there will be always some events when instructions and data-cache misses occur.

For the last few decades, Internet and telecommunication industries have had an unprecedented growth. To fulfill the requirements of up coming telecommunication industries, the traditional micro-architecture is not sufficient for processor design. Therefore, processor designers are looking for another Architecture of Pentium 4 Processor where the ratio between cost and gain is more reasonable. Hyper-threading (HT) technology is one solution. This technology was first implemented in Pentium® 4 Xeon processor in 2002. The features of hyper-threading technology are given below:

It is well known to us that each process has a context in which all the information related with the current state of execution of the process are described. In any process, the contents of the CPU registers, the program counter, the flag register are used as context. Each process should have at least one thread and sometimes more than one thread is present in a process. Each threads has its own local context. Sometimes the context of a process is shared by the other threads in that process. The common features of threads are as follows:

Presently, the trend is to run multi-threaded applications on multi-processor systems. The most com­mon multi-threaded applications are Symmetric Multi-Processor (SMP) and Chip Multi-Processing (CMP). Although a symmetric multi-processor has better performance, the die-size is still significantly large which causes higher costs and power consumptions. The chip multi-processing puts two processors on a single die. Each processor has a full set of execution and architectural resources. The processors can share an on-chip cache. CMP is orthogonal to conventional multiprocessor systems. The cost of a CMP processor is still high as the die size is larger than the size of a single core-chip and power consumption is also high.

Switch-on Event Multi-threading (SEM) The processor could be designed to switch to another task whenever a cache miss occurs. 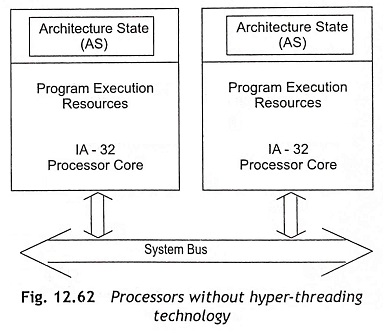 Figure 12.62 shows a system in which there are two physical processors without hyper-threading technology. On the other hand, Fig. 12.63 shows a two-processor system where each unit is capable of hyper-threading technology. Therefore, the system in Fig. 12.63 can be implemented as 4 CPU systems. This scheme has the same performance gains but the cost increase is only 5% due to about 5% die-area size increase. 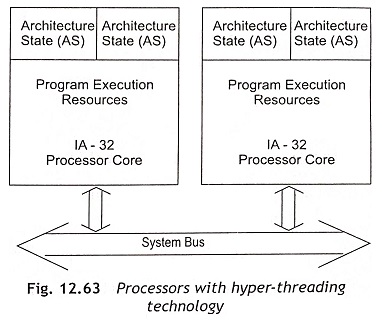 The architecture state has the following registers:

Replicated Resources Each processor has general-purpose registers, control registers, flags, time stamp counters, and APIC registers. The content of these registers are used as replicated resources.

Shared/Replicated Resources The caches and queues in the hyper-threading pipeline can he shared or not shared according to the situation.

In most of the applications, multiple numbers of processes or threads may be executed in parallel. This kind of parallel execution is called thread-level par­allelism, and these give better performance in online applications such as the server system and Internet applications.

When the current executing process is completed in time-sliced multi-threading, its context will be saved into the memory. Whenever the process starts execu­tion again, the context of the process is again restored to exactly the same state. Therefore, this process con­sists of the following operations:

To improve the system performances, the following methods are used:

In hyper-threading, the concept of simultaneous multi-threading is used. Hence, there is an improvement in the Intel micro-architecture. With increasing the cost of less than 5% in the die area, the system perfor­mance is increased by about 25 per cent.

The major advantage of this Architecture of Pentium 4 Processor is appropriate resource sharing of each shared resource. The most commonly used sharing strategies are partitioned resources, threshold sharing, and full sharing. Usually, the sharing strategy is selected based on the traffic pattern, size of the resource, potential deadlock probabili­ties and other considerations.