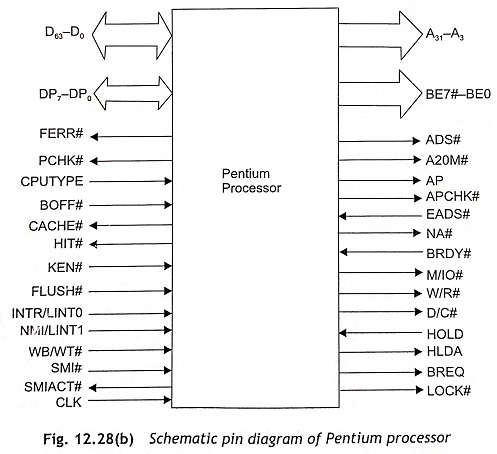 A31–A3(Output) The address bus (A31-A3) is used to drive an external memory, I/O devices and decoders. Generally, the address buses A31-A3 are used along with the byte enables signals BE7#-BE0#.

ADS#(Output) The address status signal (ADS#) shows that a new valid bus cycle is driven by the Pentium processor.

APCHK#(Output) When the Pentium processor has detected address parity errors on an inquire or snooping cycle, the Address Parity Check (APCHK#) status signal is asserted 2 clock cycles after EADS#.

AP(Input/Output) The Address Parity (AP) signal provides an even parity information for all address cycles of Pentium processor. This signal can also be used along with APCHK# and EADS# for snooping cycles.

BE7#–BE0#(Output) The byte enable signals BE7#-BE0# are used with address buses A31-A3 to indicate the bytes which will be written to the external memory.

BF1–BF0(Input) For the duration of reset, BF1-BF0 pins are sampled and fix the ratio of the external and internal clocks.

BUSCHK#(Input) The Bits Check (BUSCHK#) input signal allows the external system so that a bus cycle becomes unsuccessful. Therefore, a machine check exception will be generated depending on the state of CR4.

CACHE#(Output) When the Pentium processor initiates a cycle’s operation, the cache (CACHE#) output signal indicates that the current read cycle is internally cacheable. This signal is also used to indicate a burst write back cycle for a write cycle operation.

CLK(Input) The clock (CLK) input gives the fundamental timing for Pentium cycles. All timings signal except the JTAG signals are always referred to the clock input.

PCHK#(0utput) The Parity Check (PCHK#) output signal is used to indicate the result of a parity check on a specified data read.

PEN#(input) The Parity Enable (PEN#) input signal is used with CR4MCE to determine whether a machine cycle exception can be taken as a result of a parity error on a read cycle.

EADS#(Input) The EADS# signal determines that a valid external address has been driven into the Pentium processor for a snooping or inquire cycle.

FLUSH#(Input) When the FLUSH# input signal becomes low, the Pentium processor writes back to memory all changed cache lines and invalidates its code and data internal caches.

LOCK#(0utput) When the Lock (LOCK#) is active low, the Pentium processor does not recognize HOLD request signal.

KEN#(Input) The Cache Enable (KEN#) input signal is used to verify whether the current cycle is cacheable or not cacheable.

NA#(Input) The Next Address (N/A#) input decides whether any external system is ready to accept a new address even though all the current bus cycles have not completed. This is used to speed up memory access cycles significantly.

INTR/LINT0(Input) When INTR input signal is high, it indicates a maskable interrupt request from an external device. If the IE flag is set in the EFLAG register, the processor will accept the interrupt. The LINT0 states local interrupt 0 when the on-chip APIC is used in the Pin Diagram of Pentium Processor.

NMI/LINTI(Input) NMI stands for nonmaskable interrupt. The LINT 1 states local interrupt 1 when the on-chip APIC is used in a Pin Diagram of Pentium Processor.

RESET(Input) When Reset is high, it forces the Pentium processor to start execution at a known state and all internal caches are invalidated.

WB/WT#(Input) The Write-Back/Write-Through (WB/WT#) input signal is used to define whether a data cache line may be used as write-back (1) or write-through (0) on a line-by-line basis. This signal also decides whether a cache line is initially in the S or E state in the data cache. Usually, it is used with the PWT bit.