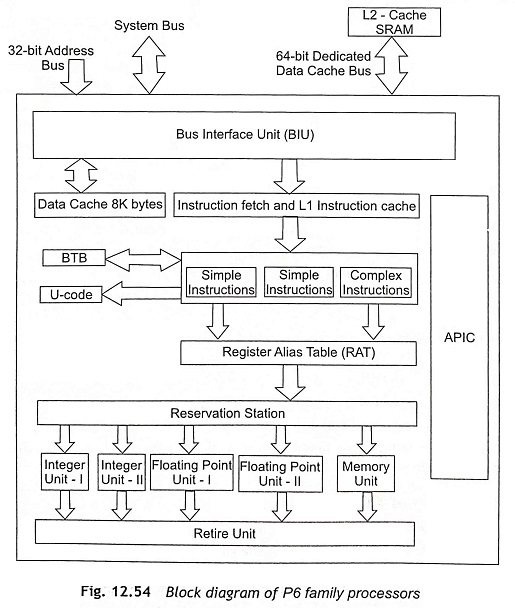 Branch Target Buffer (BTB) The branch target buffer is used to store 512 branch targets along with information to predict branches correctly. The BTB is also required for speculative execution due to the length of the pipeline.

Retire Unit and APIC The retire unit resolves data dependencies. This unit can verify branches and writes to the x86 architectural registers. The on-chip advanced programmable interrupt controller supports multiprocessing with up to 4 processors. 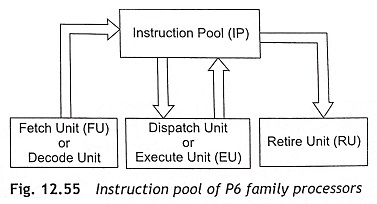 Decoder Unit The decoder unit has three parallel decoders. Two decoders are used for simple instructions and one decoder is used for complex instructions. The decoders accept the stream of fetched instructions and decode them. Actually, the decoders translate x 86 instructions into micro-operations (1-ops). Each micro-operation consists of two logical sources and a logical destination. Simple instructions are translated into single μ-ops and complex instructions are converted into a string of up to 4 μ-ops. The decoder generates up to 6 μ-ops in each clock pulse. The decoder maps references to available x86 and P6 registers. Only micro-operations (μ-ops) are executed in the execution units. Therefore, μ-ops are stored in the Register Alias Table (RAT). The RAT translates the logical register references to the physical register, which are available in P6 processors. Translation is performed in order in the IF/Decode unit. The IF/Decode unit transfers p-ops to the instruction pool. The pool of instructions is stored as an array of content addressable memory, which is known as reorder buffer. After that dynamic execution starts.

Dynamic execution of instructions states that instructions are stored in any order, but execution will be completed in the programmed order. Instruction pool is commonly available to the following three units: (i) start-in order. (ii) middle-out of order, and (iii) end-in order.

Dispatch/Execution Unit The dispatch/execution unit does the scheduling of instructions and controls dynamic instruction. This unit distributes μ-ops to the five execution units and a maximum of 5 μ-ops can be issued per clock cycle. 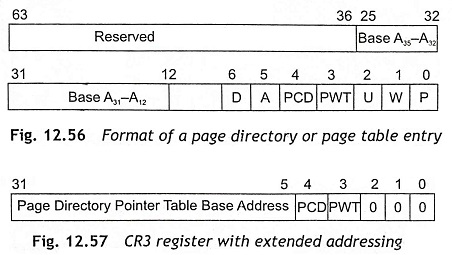 To support the 32-bit physical addresses, the paging data structure has the following changes: 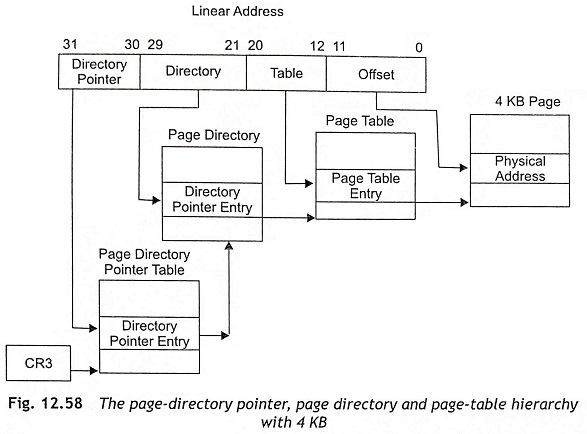