What is System Management Mode (SMM) of the Pentium Processor? 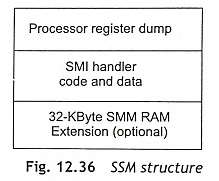 In this operating mode, the Pentium processor operates in an extended real mode. The difference between the normal real mode and an extended real mode is that the SMM address space is not limited to 1 Mbyte, as the offset registers can use 32-bit length. NMI and INTR will not provide any service until SMM has been exited. 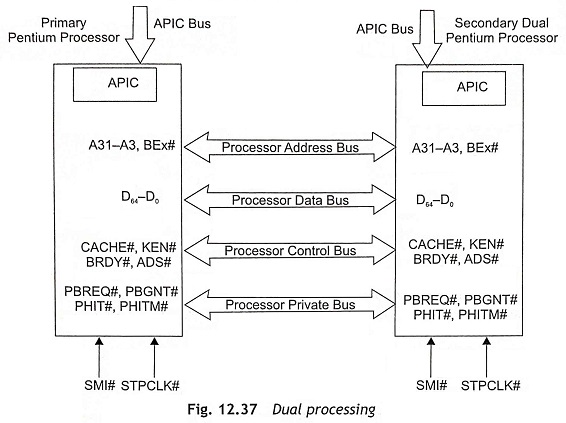 Step 2 The most recent master completes any pending bus cycles and grants the bus.

Step 4 The least recent master becomes the new MRM. After that LRM controls the signals to the common L2-cache, main memory and I/O devices.

On-Chip Advanced Programmable Interrupt Controllers Each Pentium processor has an on-chip Advanced Programmable Interrupt Controller (APIC), which is enabled by the active high voltage level on the APICEN pin during reset. Before using the APIC, the BIOS must be used to initialize the APIC. In a dual Pentium system, the APICs of primary and secondary Pentium processors must be enabled. The interrupt subsystems of the two Pentiums appear as a single interrupt system to the computer system. 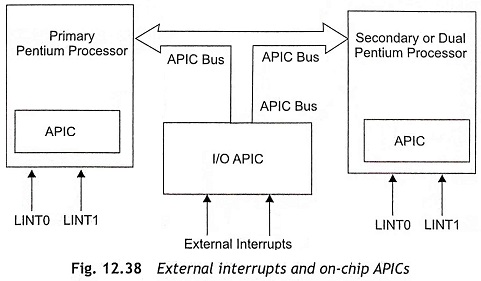 Two APICs of primary and secondary Pentium processors are communicated by the PIC bus, which consists of PICD0, PICD1, and PICCLK signals as depicted in Fig. 12.38. Usually, external interrupt request signals are fed to the 8259A PIC (Programmable Interrupt Controller) and after that interrupts are applied to the external I/O APIC (82489DX). The output signals of I/O APIC are distributed to the on-chip APICs of pri­mary and secondary Pentium processors. The 8259A (PIC) is only incorporated in the circuit for compatibility features. The local APICs process local interrupts on the LINT0 and LINT1 pins. Actually, LINT0 and LINT1 pins are NMI and INTR in a single processor system.

Performance of Pentium Processor The Pentium has a time stamp counter, a control and event select register. and two programmable event counters. These counters have specific pins associated with them and allow programmers to measure the code execution time and performance parameters.