What is Risc Processors?:

What is Risc Processors? – In the previous sections, CISC processors were discussed elaborately. CISC is pronounced sisk, and it stands for Complex Instruction Set Computer. Most desktop computers and laptops use CPUs based on this archi­tecture. Usually, CISC ICs have a large amount of different and complex instructions. The philosophy behind CISC processors is that hardware is always faster than software. Therefore, one should make a powerful instruction set, which provides programmers with assembly instructions to do a lot of tasks with very short programs. The example of CSIC microprocessors are Intel 80486, Pentium, Pentium Pro, Pentium II, Celeron and Pentium III, etc. The common features of CISC processors are as follows:

With incorporating the more and more complex instructions in a CISC, more and more sophisticated processors were developed, manufactured and used as CPUs of personal computers (PCs) for marketing. As a result, the processor die size was increased to accommodate the large numbers of microcode of the complex instructions. Due to large die size, CISC consumed more silicon and the chip size was increased. Consequently, the power consumption also increased, more heat sink was required for better cooling arrange­ment and cost of the system became high.

Subsequently, RISC chips evolved around the mid-1980s as a reaction at CISC chips. RISC is pro­nounced risk, and it stands for Reduced Instruction Set Computer. The design philosophy behind RISC is that almost no one uses complex assembly-language instructions as used by CISC, and programmers mostly use compilers which never use complex instructions. RISC utilizes a set of fewer, simpler and faster instructions, rather than a more specialized set of instructions. However, more instructions are needed to accomplish a task in RISC. Generally, each instruction is executed within a single clock after it is fetched and decoded. To achieve this, RISC reduces decode and execute logic replacing microcode by hardwired logic gates and uses instruction pipelining techniques extensively. In a CISC, a lot of disc space is consumed by microcodes. As microcode is replaced by hardwired logic in RISC, the size of RISC processors becomes smaller than CISC and it consume less power.

The first attempt was taken to make a chip-based RISC CPU at IBM in 1975. After that, UC Berkeley and Stanford started work to design and develop RISC processors. After a long research, the IBM 801 was eventually developed in a single-chip form in 1981. After that Stanford MIPS (Microprocessor without inter­locking Pipeline Stages), Berkeley RISC-I and RISC-II processors were developed. The examples of other microprocessors are DECs Alpha, power PC 601, 602, 603 and Ultra SPARC, etc. The common features of RISC processors are given below:

The performance of a computer is computered by the following equation: 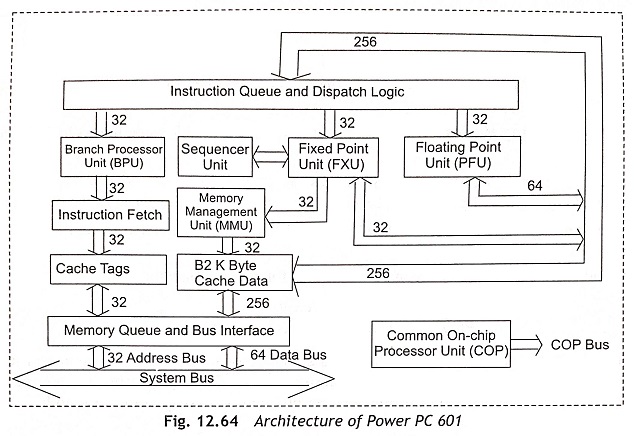 The RISC processor pipeline operates in such a way that some operations may be carried out in parallel, although the stages in the pipeline are different. Though different processors have different number of steps to execute instructions, there are five steps that will be required when a processor executes an instruction. Figure 12.65 shows the pipeline structure of Power PC 601.

Step 1 Instruction fetch phase: Read the instruction from the memory or the prefetch queue.

Step 3 Operand fetch phase: Fetch the operand whenever required for the instruction.

Step 5 Write-back phase: Write the result into the register.

The SPARC (Scalable Processor Architecture) is a unique RISC instruction set architecture. It was developed by Sun Microsystems and introduced in mid-1987. This processor consists of an integer unit, a floating-point unit, and an optional co-processor. Usually, the SPARC processor contains about 160 general-purpose reg­isters but only 32 of them are immediately visible to software at any point of time. Among the 32 registers, eight registers are a set of global registers and the other 24 registers are local registers and are used as the stack of registers. These 24 registers form a register window. During function call and return, this window is moved up and down the register stack. Each window consists of 8 local registers and shares 8 registers with each of the adjacent windows. Generally, the shared registers are used for passing function parameters and returning values, but the local registers are used for storing local values across function calls. The different versions of Sun Ultra SPARC microprocessors are Ultra SPARC T1, Ultra SPARC T2, SPARC V8, SPARC V9, SPARC64 VI , SPARC64 VII, and SPARC T3, etc. The common features of SPARC architecture are given below:

This processor supports multimedia instructions just like Pentium MMX. Hence, this can be used for multimedia and image-processing applications.