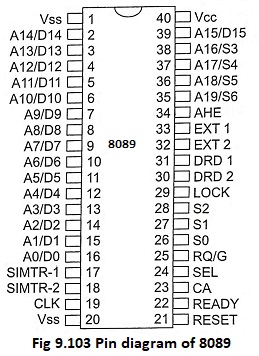 A19/S6-A16/S3(Output) These are multiplexed most significant address lines and status information as given below:

S̅2, S̅1, S̅0 (Output) These are the status pins which state the different activities of I/O processor as given below:

READY (Input/Output) This signal is received from the addressed device which indicates that the device is ready for data transfer.

L̅O̅C̅K̅ (Output) The lock output signal indicates to the bus controller that the bus requires more than one contiguous cycle.

The signal must be active for at least four clock cycles.

CA (Input) This is used as the channel attention signal of the I/O processor.

SEL (Input) The first CA received after reset informs the I/O processor through the SEL line, whether it is a master or slave and starts the initialization sequence.

DRQ2-DRQ1 (Input) These are the DMA request input signals of the I/O processor. These signals indicate that a peripheral is ready to transfer/receive data using either Channel-1 and Channel-2.

R̅Q̅/G̅T̅ (Input/Output) The request grant signal is used to implement the communication dialogue required to arbitrate the use of the system bus between IOP and CPU, LOCAL mode or I/O bus when two I/O processors share the same bus. The R̅Q̅/G̅T̅ is active low signal.

SINTR2-SINTR1 (Output) These are the interrupt output signals from Channel-1 and Channel-2 respectively.

EXT2-EXT1 (Input) These are external terminate input signals for Channel-1 and Channel-2 respectively. The EXT signal is used to terminate the current DMA transfer operation if the channel is so programmed by the channel control register. 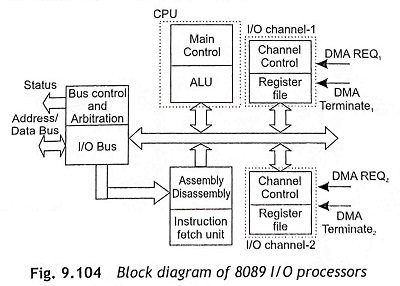 Figure 9.104 shows the block diagram of 8089 architecture. The 8089 I/O processor has two internal I/O channels. These two channels can be programmed independently to handle two separate I/O tasks for the host CPU. The ALU and main control unit are shared by both the channels. The main control unit generates the control signals for the operation of the I/O processor channels. The bus control unit handles all the bus activities. The Channel Control Pointer (CCP) is used by the programmers and gets loaded with the 20-bit address of a memory table for the channel. Actually, this table is prepared by the host CPU to allot a task to the I/O processor. The address of the memory table for Channel 2 is computed by adding 8 to the memory table address of channel 1 or the contents of CCP. 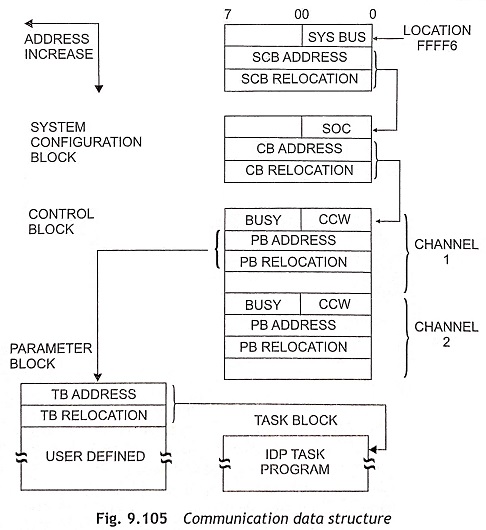 After the first CA from RESET, if the I/O processor is initialized as the BUS MASTER, 5 bytes of infor­mation are read into the 8089 starting at location FFFF6. Then information about the type of system bus and pointers to the system configuration block are obtained. This is the only fixed location to be accesses by the 8089. The remaining addresses are obtained through the data structure hierarchy.

The control block performs the bus control initialization for the I/O processor operation and provides pointers to the parameter block or data memory for channels 1 and 2. The Channel Control Word (CCW) is retrieved and analyzed. The CCW byte is decoded to determine channel operation.

The task block holds the instructions for the respective channel. This block can reside on the local bus of the I/O processor and the I/O processor can operate concurrently with the CPU. The advantage of the com­munication between the processor, I/O processor and peripherals is that it allows for a very clear method for the operating system to handle I/O routines. 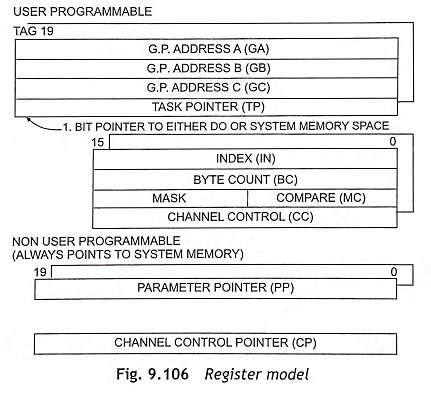 The PP register is a 20-bit pointer. The registers GA, GB, GC, IX, BC and MC can be used as general-purpose registers, when they are not used as pointers. The memory operands can be accessed using one of the base pointers GA, GB, GC, and PP.

The basic DMA pointer registers (GA and GB) can point to the system bus or local bus, DMA source or destination, and can be automatically incremented. The register set GC can be used to allow translation during the DMA process through a look-up table. The channel control register can be accessed by MOV and MOVI instructions and the mode of the channel operation will be selected. Registers are also provided for a masked compare during the data transfer and can be set up to act as one of the termination conditions. Other registers can be used as general-purpose registers during program execution, while the I/O processor is not performing DMA cycles.