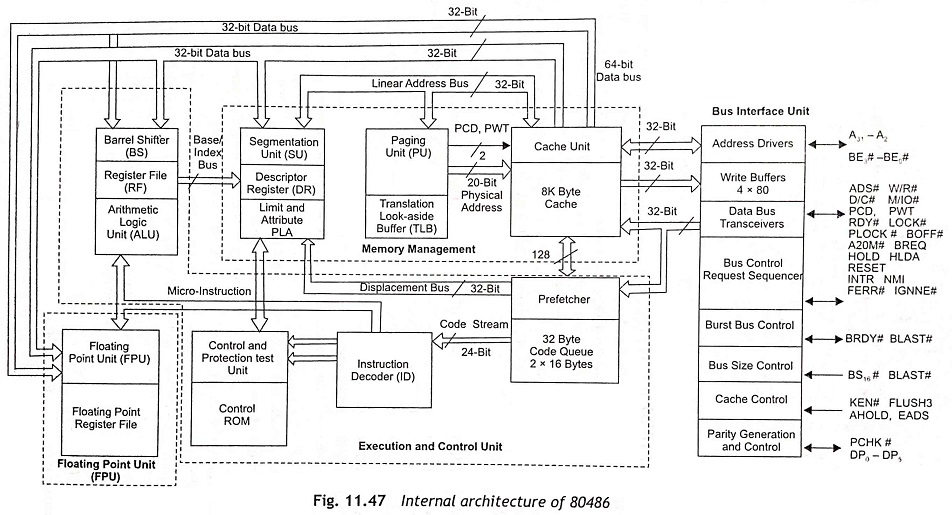 Bus Interface Unit (BIU) The bus interface unit is used to organize all the bus activities of the processor. The address driver is connected with the internal 32-bit address output of the cache and the system bus. The data bus transreceivers are interconnected between the internal 32-bit data bus and system bus. The write data buffer is a queue of four 80-bit registers and is able to hold the 80-bit data which will he written to the memory. Due to pipelined execution of the write operation, data must be available in advance. To control the bus access and operations, the following bus control and request sequencer signals A̅D̅S̅, W/R̅, D/C̅, M/I̅O̅, PCD, PWT, R̅D̅Y̅, L̅O̅C̅K̅, P̅L̅O̅C̅K̅, B̅O̅F̅F̅, A̅2̅0̅M̅, BREQ, HOLD, HLDA, RESET, INTR, NMI, F̅E̅R̅R̅ and I̅G̅N̅N̅E̅ are used.

The prefetcher unit fetches the codes from the memory and arranges them in a 32-byte code queue. The function of the instruction decoder is to receive the code from the code queue and then decodes the instruction code sequentially. The output of the decoder is fed to the control unit to derive the control signals, which are used for execution of the decoded instructions. Before execution, the protection unit should check all protec­tion norms. If there is in any violation, an appropriate exception is generated.

The control ROM stores a microprogram to generate control signals for execution of instructions. The register hank and ALU are used for their usual operation just like they perform in 80286. The barrel shifter is used to perform the shift and rotate algorithms. The segmentation unit, descriptor registers, paging unit, translation look aside buffer and limit and attribute PLA are worked together for the virtual memory manage­ment. These units also provide protection to the op-codes or operand in the physical memory.

Floating–point Unit (FPU) The floating-point unit and register banks or FPU communicate with the bus interface unit (BIU) under the control of memory management unit (MMU), through a 64-bit internal data bus. Generally, the FPU is used for mathematical data processing at very high speed as compared to the ALU. 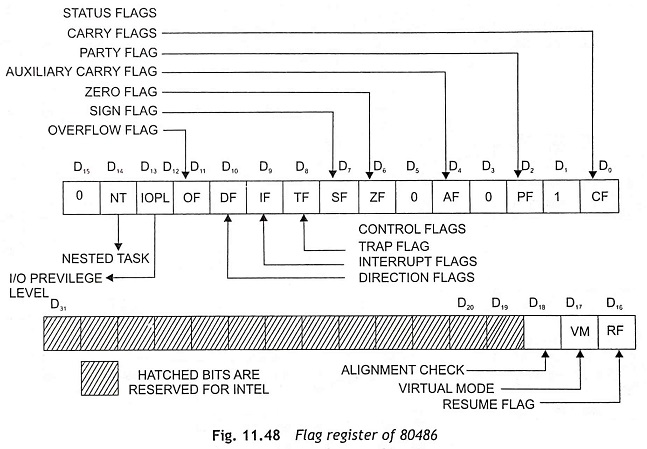