Let us consider the problem of controlling the power output of the generators of a closely knit electric area so as to maintain the scheduled frequency. All the generators in such an area constitute a coherent group so that all the generators speed up and slow down together maintaining their relative power angles. Such an area is defined as a control area. The boundaries of a control area will generally coincide with that of an individual Electricity Board Company. To understand the Load Frequency Control of Single Area System, let us consider a single turbo-generator system supplying an isolated load.

Figure 8.2 shows schematically the governing system of a steam turbine. The system consists of the following components: 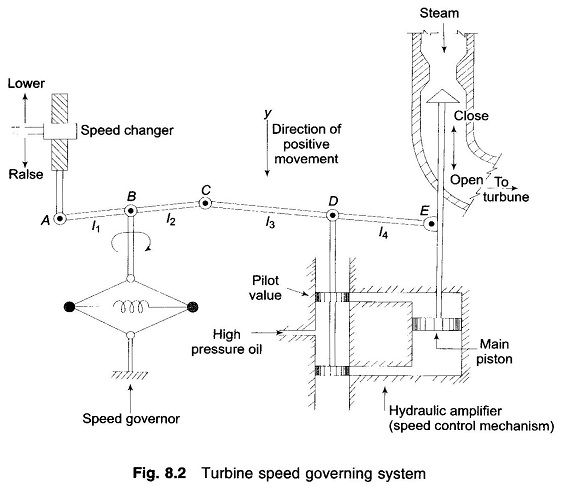 (i) Fly ball speed governor: This is the heart of the system which senses the change in speed (frequency). As the speed increases the fly balls move outwards and the point B on linkage mechanism moves downwards. The reverse happens when the speed decreases.

We shall obtain a linear incremental model around these operating conditions.

Let the point A on the linkage mechanism be moved downwards by a small amount ΔyA. It is a command which causes the turbine power output to change and can therefore be written as

where ΔPC is the commanded increase in power.

Two factors contribute to the movement of C:

(ii) Increase in frequency Δf causes the fly balls to move outwards so that B moves downwards by a proportional amount k′2  Δf. The consequent movement of C with A remaining fixed at ΔyA is + (l1 + l2 / l1) k′2Δf = + k2Δf

The net movement of C is therefore

The movement of D, ΔyD, is the amount by which the pilot value opens. It is contributed by ΔyC and ΔyE and can be written as

The movement ΔyD depending upon its sign opens one of the ports of the pilot valve admitting high pressure oil into the cylinder thereby moving the main piston and opening the steam valve by ΔyE. Certain justifiable simplifying assumptions, which can be made at this stage, are:

The volume of oil admitted to the cylinder is thus proportional to the time integral of ΔyD. The movement ΔyE is obtained by dividing the oil volume by the area of the cross-section of the piston. Thus

It can be verified from the schematic diagram that a positive movement ΔyD causes negative (upward) movement ΔyE accounting for the negative sign used in Eq. (8.4).

The speed governing system of a hydro-turbine is more involved. An additional feedback loop provides temporary droop compensation to prevent instability. This is necessitated by the large inertia of the penstock gate which regulates the rate of water input to the turbine. Modelling of a hydro-turbine regulating system is beyond the scope of this book.

Let us now relate the dynamic response of a steam turbine in terms of changes in power output to changes in steam valve opening ΔyE. Figure 8.4a shows a two stage steam turbine with a reheat unit. The dynamic response is largely influenced by two factors, (i) entrained steam between the inlet steam valve and first stage of the turbine, (ii) the storage action in the reheater which causes the output of the low pressure stage to lag behind that of the high pressure stage. Thus, the turbine transfer function is characterized by two time constants. For ease of analysis it will be assumed here that the turbine can be modelled to have a single equivalent time constant. Figure 8.4b shows the transfer function model of a steam turbine. Typically the time constant Tt lies in the range 0.2 to 2.5 sec. 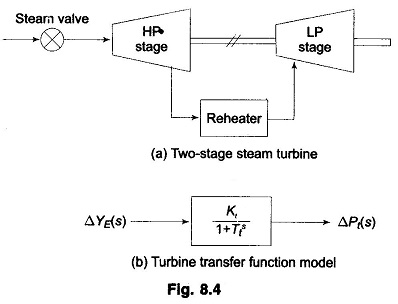 The increment in power input to the generator-load system is

where ΔPG = ΔPt incremental turbine power output (assuming generator incremental loss to be negligible) and ΔPD is the load increment.

This increment in power input to the system is accounted for in two ways:

(i) Rate of increase of stored kinetic energy in the generator rotor. At scheduled frequency (f°), the stored energy is

where Pr is the kW rating of the turbo-generator and H is defined as its inertia constant.

Rate of change of kinetic energy is therefore

(ii) As the frequency changes, the motor load changes being sensitive to speed, the rate of change of load with respect to frequency, i.e. δPD/δf can be regarded as nearly constant for small changes in frequency Δf and can be expressed as

where the constant B can be determined empirically. B is positive for a predominantly motor load.

Writing the power balance equation, we have

Dividing throughout by Pr and rearranging, we get

Taking the Laplace transform, we can write ΔF(s) as

The model of Fig. 8.6 shows that there are two important incremental inputs to the Load Frequency Control of Single Area System -ΔPC, the change in speed changer setting; and ΔPD, the change in load demand. Let us consider a simple situation in which the speed changer has a fixed setting (i.e. ΔPC = 0) and the load demand changes. This is known as free governor operation. For such an operation the steady change in system frequency for a sudden change in load demand by an amount ΔPD (i.e. ΔPD(s) = ΔPD/s) is obtained as follows: 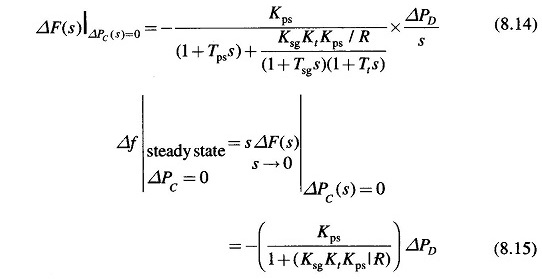 While the gain Kt is fixed for the turbine and Kps is fixed for the power system, Ksg, the speed governor gain is easily adjustable by changing lengths of various links. Let it be assumed for simplicity that Ksg is so adjusted that

The above equation gives the steady state changes in frequency caused by changes in load demand. Speed regulation R is naturally so adjusted that changes in frequency are small (of the order of 5% from no load to full load). Therefore, the linear incremental relation (8.16) can be applied from no load to full load. With this understanding, Fig. 8.7 shows the linear relationship between frequency and load for free governor operation with speed changer set to give a scheduled frequency of 100% at full load. The ‘droop’ or slope of this relationship is -(1/ B+(I/R)). 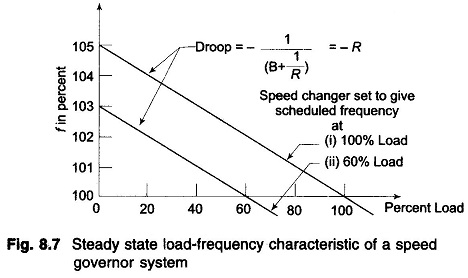 The droop of the Load Frequency Control of Single Area System curve is thus mainly determined by R, the speed governor regulation.

It is also observed from the above that increase in load demand (ΔPD) is met under steady conditions partly by increased generation (ΔPG) due to opening of the steam valve and partly by decreased load demand due to drop in system frequency. From the block diagram of Fig. 8.6 (with KsgKt ≈ 1)

Of course, the contribution of decrease in system load is much less than the increase in generation. For typical values of B and R quoted earlier

If the speed changer setting is changed by ΔPC while the load demand changes by ΔPD, the steady frequency change is obtained by superposition, i.e.

According to Eq. (8.21) the frequency change caused by load demand can be compensated by changing the setting of the speed changer, i.e.