A Inductance of Single Phase Two Wire System consists of two parallel conductors which form a rectangular loop of one turn. When an alternating current flows through such a loop, a changing magnetic flux is set up. The changing flux links the loop and hence the loop (or single phase line) possesses inductance. It may appear that inductance of a single phase line is negligible because it consists of a loop of one turn and the flux path is through air of high reluctance. But as the X -sectional area of the loop is very large, even for a small flux density, the total flux linking the loop is quite large and hence the line has appreciable Inductance of Single Phase Two Wire System.

Consider a single phase overhead line consisting of two parallel conductors A and B spaced d metres apart as shown in Fig. 9.7. Conductors A and B carry the same amount of current (i.e. IA = IB), but in the opposite direction because one forms the return circuit of the other.

Flux linkages with conductor A due to its own current

Flux linkages with conductor A due to current IB

Total flux linkages with conductor A is 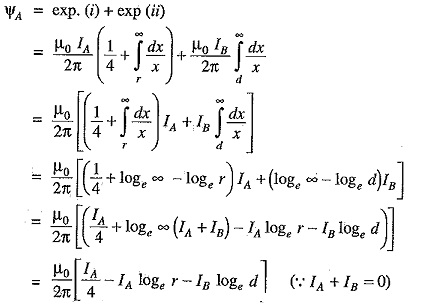 Inductance of conductor A,

Expression in alternate form: The expression for the inductance of a conductor can be put in a concise form.

The radius r′ is that of a fictitious conductor assumed to have no internal flux but with the same inductance as the actual conductor of radius r. The quantity e-1/4 = 0.7788 so that

The term r′ (= r e-1/4) is called geometric mean radius (GMR) of the wire. Note that eq.(iii) gives the same value of inductance LA as eq.(i). The difference is that eq.(iii) omits the term to account for internal flux but compensates for it by using an adjusted value of the radius of the conductor.