The potential difference Vab can be written in terms of the contributions made by qa and qb by use of Eq. (3.2) with associated assumptions (i.e. D/r is large and ground is far away). Thus,

The line capacitance Cab is then

The associated line charging current is 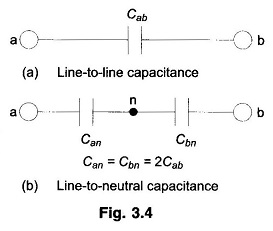 As shown in Figs. 3.4 (a) and (b) the line-to-line capacitance can be equivalently considered as two equal capacitances is series. The voltage across the lines divides equally between the capacitances such that the neutral point n is at the ground potential. The capacitance of each line to neutral is then given by

The assumptions inherent in the above derivation are:

1. The charge on the surface of each conductor is assumed to be uniformly distributed, but this is strictly not correct.

If non-uniformity of charge distribution is taken into account, then

If D/2r ≫ 1, the above expression reduces to that of Eq. (3.6) and the error caused by the assumption of uniform charge distribution is negligible.