A Capacitance of Single Core Cable can be considered to be equivalent to two long co-axial cylinders. The conductor (or core) of the cable is the inner cylinder while the outer cylinder is represented by lead sheath which is at earth potential. Consider a Capacitance of Single Core Cable with conductor diameter d and inner sheath diameter D (Fig. 11.13). Let the charge per meter axial length of the cable be Q coulombs and e be the permittivity of the insulation material between core and lead sheath. Obviously ε = ε0εr where εr is the relative permit­tivity of the insulation. 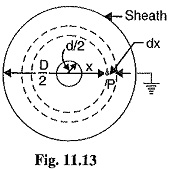 Capacitance of the cable is 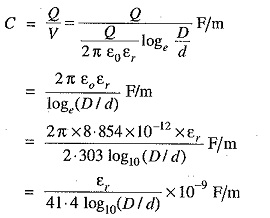 If the cable has a length of l meters, then capacitance of the cable is 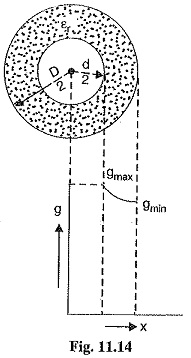 Consider a Capacitance of Single Core Cable with core diameter d and internal sheath diameter D. As proved in Art 11.8, the electric intensity at a point x metres from the centre of the cable is

As proved in Art. 11.8, potential difference V between conductor and sheath is

The variation of stress in the dielectric is shown in Fig. 11.14. It is clear that dielectric stress is maximum at the conductor surface and its value goes on decreasing as we move away from the conductor. It may be noted that maximum stress is an important consideration in the design of a cable. For instance, if a cable is to be operated at such a voltage that maximum stress is 5 kV/mm, then the insulation used must have a dielectric strength of at least 5 kV/mm, otherwise breakdown of the cable will become inevitable.

Conductor Size in a Cable

It has already been shown that maximum stress in a cable occurs at the surface of the conductor For safe working of the cable, dielectric strength of the insulation should be more than the maximum stress. Rewriting the expression for maximum stress, we get,

The values of working voltage V and internal sheath diameter D have to be kept fixed at certain values due to design considerations. This leaves conductor diameter d to be the only variable in exp. (i) For given values of V and D, the most economical conductor diameter will be one for which gmax has a minimum value. The value of  gmax will be minimum when d loge D/d is maximum i.e.

Most economical conductor diameter is

and the value of gmax under this condition is

For low and medium voltage cables, the value of conductor diameter arrived at by this method (i.e., d = 2 V/gmax) is often too small from the point of view of current density. Therefore, the conductor diameter of such cables is determined from the consideration of safe current density. For high voltage cables, designs based on this theory give a very high value of d, much too large from the point of view of current carrying capacity and it is, therefore, advantageous to increase the conductor diameter to this value. There are three ways of doing this without using excessive copper :