The first stage may be viewed as two differential amplifiers, as depicted in Fig. 34.48. 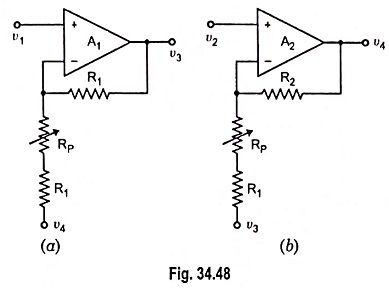 The output voltages of the two differential amplifiers shown in Fig. 34.48 are determined by using superposition theorem.

The output voltage of the first stage may be given as

The gain of the second stage may be determined using Eq. (34.42) and is given by

The overall voltage gain is given by

In Fig. 34.48 (a), for example, when v4 is reduced to zero (i.e. when v2 is grounded), the circuit is a noninverting amplifier and the input impedance is given as

Similarly, the input resistance determined at input v2 will be the same as determined above [Eq. (34.59)].