Percentage Biased Differential Relay – In order to avoid undesirable operation on heavy external faults due to CT errors and ratio change as a result of tap changing, a restraining winding is provided which is energized by the through current.

In other words the operating winding is biased and operates by some percentage of the through current then the relay becomes more sensitive at low current without tripping for external fault.

Under these conditions and if the restraining and operating magnets are similar with the ratio of turns as T, the criterion for operation for a static comparator is:

and for an electromagnetic comparator

Value of T is usually 0.05 for generators and 0.1-0.4 for transformers, the higher values being used if the transformer ratio is varied by a tap changer.

Figure (6.2) shows the single line diagram of the Percentage Biased Differential Relay scheme for the transformer. Bias is adjustable by tappings on the restraining winding and setting by spring restraint typical values are 10 to 40% for bias and 50 to 100% for setting. The time characteristics of induction relays are such that magnetizing inrush currents do not cause operation.

Figure (6.3) shows the bias characteristic for a typical relay 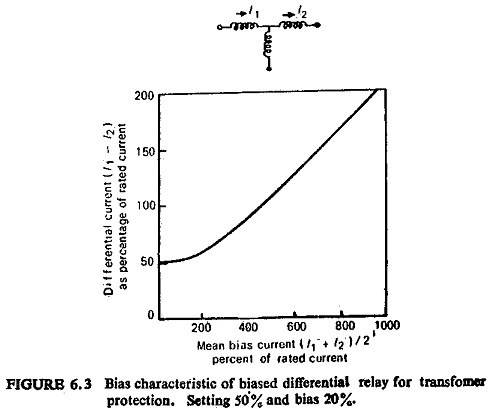