Most of the relays discussed so far relied on excess of current for their operation. Such relays are less sensitive because they cannot make correct distinction between heavy load conditions and minor fault conditions. In order to overcome this difficulty, differential relay are used.

A differential relay is one that operates when the phasor difference of two or more similar electrical quantities exceeds a pre-determined value.

Thus a current differential relay is one that compares the current entering a section of the system with the current leaving the section. Under normal operating conditions, the two currents are equal but as soon as a fault occurs, this condition no longer applies. The difference between the incoming and outgoing currents is arranged to flow through the operating coil of the relay. If this differential current is equal to or greater than the pickup value, the relay will operate and open the circuit breaker to isolate the faulty section.

Fig. 21.23 shows an arrangement of an over current relay connected to operate as a differential relay. A pair of identical current transformers are fitted on either end of the section to be protected (alternator winding in this case). The secondaries of CT’s are connected in series in such a way that they carry the induced currents in the same direction. The operating coil of the over current relay is connected across the CT secondary circuit. This differential relay compares the current at the two ends of the alternator winding.

Under normal operating conditions, suppose the alternator winding carries a normal current of 1000 A. Then the currents in the two secondaries of CT’s are equal [See Fig. 21.23]. These currents will merely circulate between the two CT’s and no current will flow through the differential relay. Therefore, the relay remains inoperative. If a ground fault occurs on the alternator winding as shown in Fig. 21.24 (i), the two secondary currents will not be equal and the current flows through the operating coil of the relay, causing the relay to operate. The amount of current flow through the relay will depend upon the way the fault is being fed. 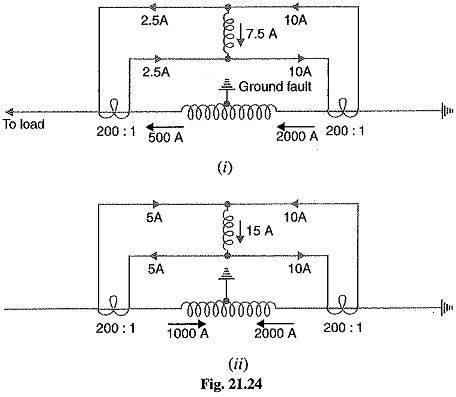 The above disadvantages are overcome to a great extent in biased beam relay.

The biased beam relay (also called Percentage Differential Relay) is designed to respond to the differential current in terms of its fractional relation to the current flowing through the protected section. Fig. 21.25 shows the schematic arrangement of a biased beam relay. It is essentially an overcurrent balanced beam relay type with an additional restraining coil. The restraining coil produces a bias force in the opposite direction to the operating force. 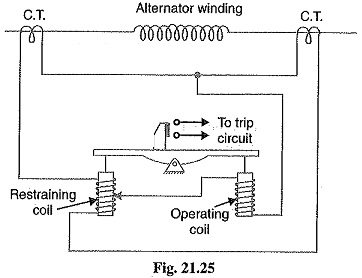 Fig. 21.27 shows the arrangement of voltage balance protection. In this scheme of protection, two similar current transformers are connected at either end of the element to be protected (e.g. an alternator winding) by means of pilot wires. The secondaries of current transformers are connected in series with a relay in such way that under normal conditions,their induced e.m.f.s’  are in opposition.

Under healthy conditions, equal currents II = I2) flow in both primary windings. Therefore, the secondary voltages of the two transformers are balanced against each other and no current will flow through the relay operating coil. When a fault occurs in the protected zone, the currents in the two primaries will differ from one another (i.e. I1 ≠ I2) and their secondary voltages will no longer be in balance. This voltage difference will cause a current to flow through the operating coil of the relay which closes the trip circuit.

The voltage balance system suffers from the following drawbacks:

The above disadvantages have been overcome in Translay (modified) balanced voltage system.