An Structure of Power System, even the smallest one, constitutes an electric network of vast complexity. The one factor that determines the system structure more than any others is system size. We shall not here enter into a discussion of the reasons of economical, political, historical, and technological nature that lie behind the present size distribution. By pointing out the great diversity in system magnitude, we wish to make it clear that there are no general rule regarding Structure of Power System that apply to all systems. It is possible, however, to discern certain similarities characterizing the majority of the systems.

As we are going to see, power transmittability increases and transmission losses decrease with increasing voltage level. The larger the blocks of power to be transmitted and the greater the distance over which they must be wheeled, the higher must be the operating voltage chosen. 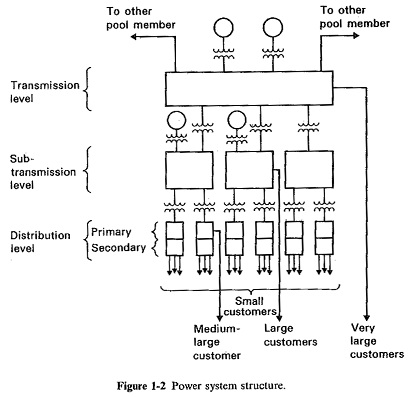 Starting with the lowest voltage class we can distinguish the following transmission levels:

Figure 1-2 shows schematically how a typical Structure of Power System from a voltage-level point of view.

The distribution circuits, fed from the distribution substation transformer to customers. Distribution engineering is in itself a sub; technology of considerable importance and variety, covering the problems of overhead or underground service, metering, switching, and protection.

The subtransmission circuit distributes Energy to a number of distribution sub­stations in a certain geographical area at a voltage level that typically varies between 23 and 138 kV. It receives the energy directly from the generator bus in a generator station or via bulk power substations. Large customers are served directly from those stations.

The transmission system is distinctly different, in both its operation and characteristics, from the distribution and subtransmission systems. Whereas the latter two in most cases draw energy from a single source and transmit it to individual loads, the function of the transmission system is quite different. Not only does it handle the largest blocks of power, it also interconnects all the generator stations and all the major loading points in the system. The Energy can be routed, generally, in any desired direction on the various links of the transmission system in a way that corresponds to best overall operating economy or best serves a technical objective. Via interties, transport of energy can take place to or from other Structure of Power System belonging to the same power pool.

The fundamental difference in the purpose of the transmission system as compared with the subtransmission and distribution systems shows up in the network structure. Whereas the latter two generally (but not always) are o radial structure (Fig. 1-3), the former tends to obtain a loop structure, at exemplified in Fig. 1-4. A radial-type network is the obvious solution where the Energy flow has a predominant direction. The loop structure evidently gives more path combinations, and therefore better suits the purpose of the transmission level. 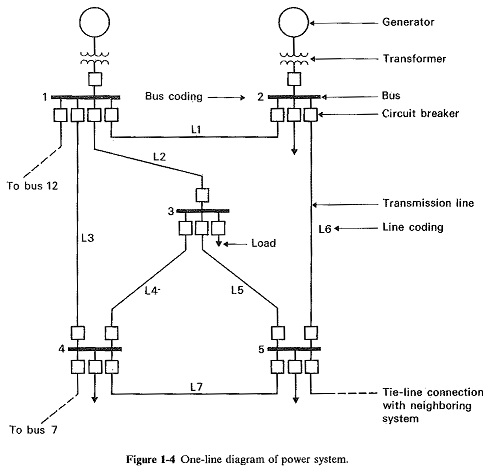