For economical and technological reasons (which will be discussed in detail in later chapters), individual power systems are organized in the form of electrically connected areas or regional grids (also called power pools). Each area or regional grid operates technically and economically independently, but these are eventually interconnected to form a national grid (which may even form an international grid) so that each area is contractually tied to other areas in respect to certain generation and scheduling features. India is now heading for a national grid.

The siting of hydro stations is determined by the natural water power sources. The choice of site for coal fired thermal stations is more flexible. The following two alternatives are possible.

In practice, however, power station siting will depend upon many factors technical, economical and environmental. As it is considerably cheaper to transport bulk electric energy over extra high voltage (EHV) transmission lines than to transport equivalent quantities of coal over rail road, the recent trends in India (as well as abroad) is to build super (large) thermal power stations near coal mines. Bulk power can be transmitted to fairly long distances over transmission lines of 400 kV and above. However, the country’s coal resources are located mainly in the eastern belt and some coal fired stations will continue to be sited in distant western and southern regions.

As nuclear stations are not constrained by the problems of fuel transport and air pollution, a greater flexibility exists in their siting, so that these stations are located close to load centers while avoiding high density pollution areas to reduce the risks, however remote, of radioactivity leakage.

In India, as of now, about 75% of electric power used is generated in thermal plants (including nuclear). 23% from mostly hydro stations and 2%. come from renewables and others. Coal is the fuel for most of the steam plants, the rest depends upon oil/natural gas and nuclear fuels.

Electric power is generated at a voltage of 11 to 25 kV which then is stepped up to the transmission levels in the range of 66 to 400 kV (or higher). As the transmission capability of a line is proportional to the square of its voltage, research is continuously being carried out to raise transmission voltages. Some of the countries are already employing 765 kV. The voltages are expected to rise to 800 kV in the near future. In India, several 400 kV lines are already in operation. One 800 kV line has just been built.

For very long distances (over 600 km), it is economical to transmit bulk power by DC transmission. It also obviates some of the technical problems associated with very long distance AC transmission. The DC voltages used are 400 kV and above, and the line is connected to the AC systems at the two ends through a transformer and converting/inverting equipment (silicon controlled rectifiers are employed for this purpose). Several DC transmission lines have been constructed in Europe and the USA. In India two HVDC transmission line (bipolar) have already been commissioned and several others are being planned. Three back to back HVDC systems are in operation. 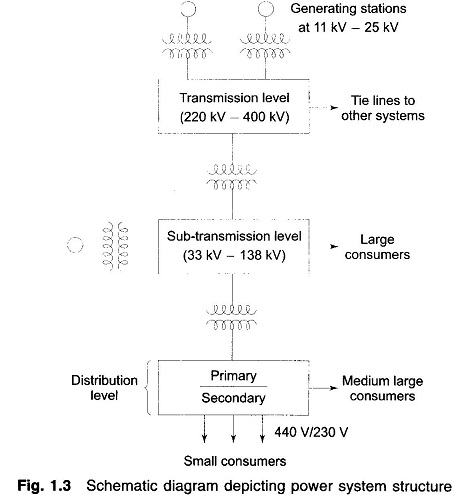 Thus, the power system operates at various voltage levels separated by transformer. Figure 1.3 depicts schematically the structure of a power system. Though the distribution system design, planning and operation are subjects of great importance, we are compelled, for reasons of space, to exclude them from the scope of this book.