Consider Bridged T Network Analysis as shown in the Fig. 6.15 (a). 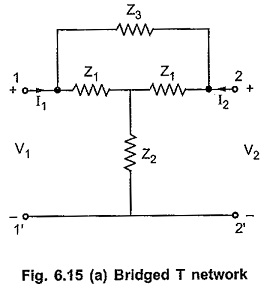 We can consider bridged T network as a parallel connection of the two networks as shown in the Fig. 6.15 (b). The y-parameters of the overall network can be obtained by adding y-parameters of networks connected in parallel. 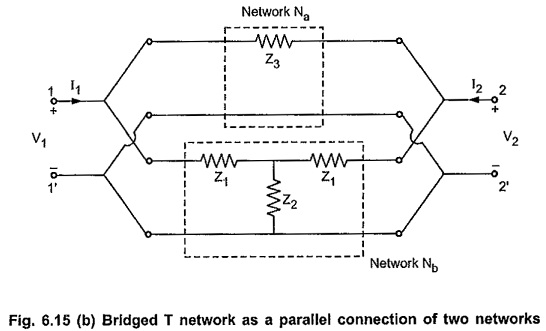 The parameters of the network Na are given by

Hence y-parameters of the network Nb are given by

The Zin is the input impedance function of the ladder network.

The continued fraction method of finding driving point impedance of the network is already discussed. Let us study another simple method of obtaining network functions of a ladder network.

Consider a four branch ladder network as shown in the Fig. 6.17, to understand the method.

The various node voltages and branch currents are indicated. Analyse the output end. 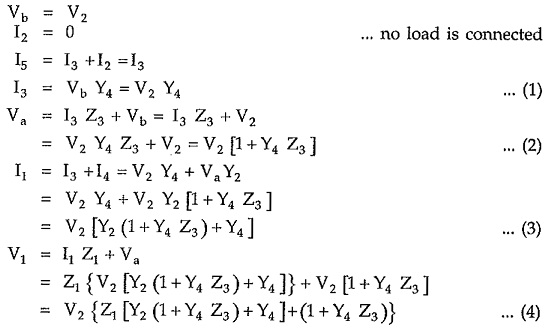 It can be observed that each equation depends on the earlier two equations only. Each new equation takes into account one new immitance (either impedance or admittance). The each new equation is obtained by multiplying the equation just preceding it by the immitance that is next down the line and then adding to this product, an equation which is twice preceding it.

For example consider equation (2). The next equation is obtained by multiplying this equation by Y2 which is next admittance down the line and adding to it an equation (1) which is twice preceding the new equation.

Thus general procedure for the analysis is,

The method discussed above is called unit output method as every equation contain V2 factor which can be normalized to V2 = 1.