A Wheatstone Bridge diagram in its simplest form consists of a network of four resistance arms forming a closed circuit, with a dc source of current applied to two opposite junctions and a current detector connected to the other two junctions, as shown in Fig. 11.1. 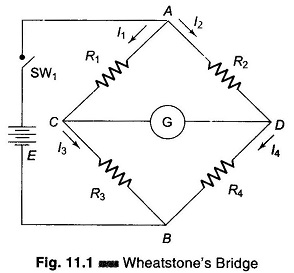 Wheatstone Bridge diagram are extensively used for measuring component values such as R, L and C. Since the bridge circuit merely compares the value of an unknown component with that of an accurately known component (a standard), its measurement accuracy can be very high. This is because the readout of this comparison is based on the null indication at bridge balance, and is essentially independent of the characteris­tics of the null detector. The measurement accuracy is therefore directly related to the accuracy of the bridge component and not to that of the null indicator used.

The basic dc bridge is used for accurate measurement of resistance and is called Wheatstone’s bridge.

Wheatstone’s bridge is the most accurate method available for measuring resistances and is popular for laboratory use. The circuit diagram of a typical Wheatstone Bridge diagram is given in Fig. 11.1. The source of emf and switch is con­nected to points A and B, while a sensitive current indicating meter, the galva­nometer, is connected to points C and D. The galvanometer is a sensitive microammeter, with a zero centre scale. When there is no current through the meter, the galvanometer pointer rests at 0, i.e. mid scale. Current in one direction causes the pointer to deflect on one side and current in the opposite direction to the other side.

To obtain the bridge balance equation, we have from the Fig. 11.1.

For the galvanometer current to be zero, the following conditions should be satisfied.

This is the equation for the bridge to be balanced.

In a practical Wheatstone Bridge diagram, at least one of the resistance is made adjustable, to permit balancing. When the bridge is balanced, the unknown resistance (normally connected at R4) may be determined from the setting of the adjustable resistor, which is called a standard resistor because it is a precision device having very small tolerance.

Sensitivity of a Wheatstone Bridge:

When the bridge is in an unbalanced condition, current flows through the galva­nometer, causing a deflection of its pointer. The amount of deflection is a func­tion of the sensitivity of the galvanometer. Sensitivity can be thought of as deflection per unit current. A more sensitive galvanometer deflects by a greater amount for the same current. Deflection may be expressed in linear or angular units of measure, and sensitivity can be expressed in units of S = mm/μA or degree/µA or radians/μA.

Therefore it follows that the total deflection D is D = S x 1, where S is defined above and I is the current in microamperes.

To determine the amount of deflection that would result for a particular degree of unbalance, general circuit analysis can be applied, but we shall use Thevenin’s theorem. 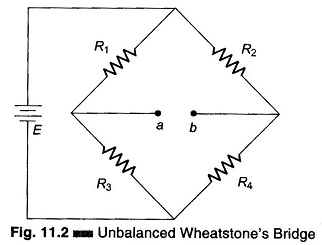 Thevenin’s equivalent voltage is found by disconnecting the galvanometer from the Wheatstone Bridge diagram, as shown in Fig. 11.2, and determining the open-circuit voltage between terminals a and b.

Applying the voltage divider equation, the voltage at point a can be deter­mined as follows

Therefore, the voltage between a and b is the difference between Ea and Eb, which represents Thevenin’s equivalent voltage. 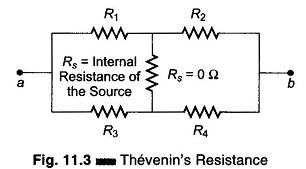 If three of the four resistor in a bridge are equal to R and the fourth differs by 5% or less, we can develop an approximate but accurate expression for Thevenin’s equivalent voltage and resistance. 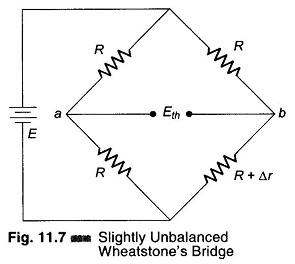 The voltage at point a is

The voltage at point b is

Thevenin’s equivalent voltage be­tween a and b is the difference be­tween these voltages. 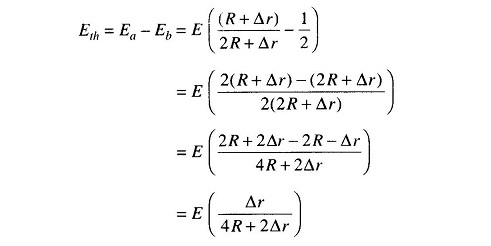 If Δ r is 5% of R or less, Δ r in the denominator can be neglected without introducing appreciable error. Therefore, Thevenin’s voltage is

Again, if Δr is small compared to R, Δ r can be neglected. Therefore,

Using these approximations, the Thevenin’s equivalent circuit is as shown in Fig. 11.8. These approximate equations are about 98% accurate if Δr ≤ 0.05 R. 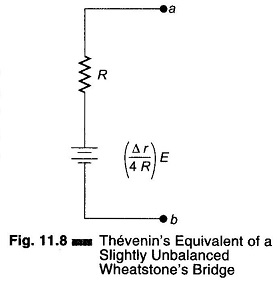 A Wheatstone bridge may be used to measure the dc resistance of various types of wire, either for the purpose of quality control of the wire itself, or of some assembly in which it is used. For example, the resistance of motor windings, transformers, solenoids, and relay coils can be measured.

Wheatstone Bridge diagram is also used extensively by telephone companies and others to locate cable faults. The fault may be two lines shorted together, or a single line shorted to ground.

For low resistance measurement, the resistance of the leads and contacts becomes significant and introduces an error. This can be eliminated by Kelvin’s Double bridge.

Another difficulty in Wheatstone Bridge diagram is the change in resistance of the bridge arms due to the heating effect of current through the resistance. The rise in temperature causes a change in the value of the resistance, and excessive current may cause a permanent change in value.