What is Load Forecasting in Power System?: 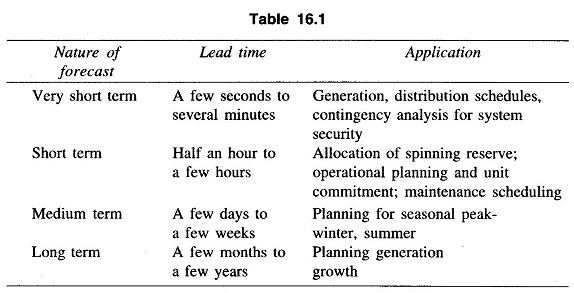 A good forecast reflecting current and future trends, tempered with good judgement, is the key to all planning, indeed to financial success. The accuracy of a forecast is crucial to any electric utility, since it determines the timing and characteristics of major system additions. A forecast that is too low can result in low revenue from sales to neighboring utilities or even in load curtailment. Forecasts that are too high can result in severe financial problems due to excessive investment in a plant that is not fully utilized or operated at low capacity factors. No forecast obtained from analytical procedures can be strictly relied upon the judgement of the forecaster, which plays a crucial role in arriving at an acceptable forecast.

Choosing a forecasting technique for use in establishing future load requirements is a nontrivial task in itself. Depending on nature of load variations, one particular method may be superior to another.

The two approaches to load forecasting namely total load approach and component approach have their own merits and demerits. Total load approach has the merit that it is much smoother and indicative of overall growth trends and easy to apply. On the other hand, the merit of the component Approach is that abnormal conditions in growth trends of a certain component can be detected, thus preventing misleading forecast conclusions. There is a continuing need, however, to improve the methodology for forecasting power demand more accurately.

The aim of the Load Forecasting in power system is to give brief expositions of some of the techniques that have been developed in order to deal with the various load forecasting problems. All of these are based on the assumption that the actual load supplied by a given system matches the demands at all points of time (i.e., there has not been any outages or any deliberate shedding of load). It is then possible to make a statistical analysis of previous load data in order to set up a suitable model of the demand pattern. Once this has been done, it is generally possible to utilize the identified load model for making a prediction of the estimated demand for the selected lead time. A major part of the forecasting task is thus concerned with that of identifying the best possible model for the past load behavior. This is best achieved by decomposing the load demand at any given point of time into a number of distinct components. The load is dependent on the industrial, commercial and agricultural activities as well as the weather condition of the system/area. The weather sensitive component depends on temperature, cloudiness, wind velocity, visibility and precipitation. Recall the brief discussions regarding the nature of the daily load curve which has been shown to have a constant part corresponding to the base load and other variable parts. For the sake of Load Forecasting, a simple decomposition may serve as a convenient starting point. Let y(k) represent the total load demand (either for the whole or a part of the system) at the discrete time k = 1, 2, 3, …. It is generally possible to decompose y(k) into two parts of the form

where the subscript d indicates the deterministic part and the subscript s indicates the stochastic part of the demand. If k is considered to be the present time, then y(k + j), j > 0 would represent a future load demand with the index j being the lead time. For a chosen value of the index j, the forecasting problem is then the same as the problem of estimating the value of y(k + j) by processing adequate data for the past load demand.