Types of Load in Power System:

what is load in power system : A device which taps electrical energy from the electric power system is called a load on the system. The load may be resistive (e.g., electric lamp), inductive (e.g., induction motor), capacitive or some combination of them. The various Types of Load in Power System are :

Domestic load consists of lights, fans, refrigerators, heaters, television, small motors for pumping water etc. Most of the residential load occurs only for some hours during the day (i.e., 24 hours) g., lighting load occurs during night time and domestic appliance load occurs for only a few hours. For this reason, the load factor is low (10% to 12%).

Another Types of Load in Power System is Commercial load consists of lighting for shops, fans and electric appliances used in restaurants etc. This class of load occurs for more hours dining the day as compared to the domestic load. The commercial load has seasonal variations due to the extensive use of air-conditioners and space heaters.

Municipal load consists of street lighting, power required for water supply and drainage purposes. Street lighting load is practically constant throughout the hours of the night. For water supply, water is pumped to overhead tanks by pumps driven by electric motors. Pumping is carried out during the off-peak period, usually occurring during the night. This helps to improve the load factor of the power system.

This Types of Load in Power System is the electric power needed for pumps driven by motors to supply water to fields. Generally this type of load is supplied for 12 hours during night.

This Types of Load in Power System includes train cars, trolley buses, railways etc. This class of load has wide variation. During the morning hour, it reaches peak value because people have to go to their work place. After morning hours, the load starts decreasing and again rises during evening since the people start coming to their homes.

The demand factor and diversity factor depend on the Types of Load in Power System and its magnitude. 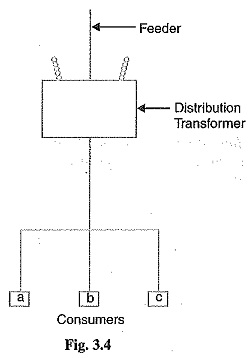 Likewise diversification between feeders is recognized when obtaining substation maximum demands and substation diversification when predicting maximum load on the power station. Note that diversity factor is the sum of the individual maximum demands of Consumers the subdivisions of a system taken as they may occur during the daily cycle divided by the maximum simultaneous demand of the system. The “system” may be a group of consumers served by a certain transformer, a group of transformers served by a feeder etc. Since individual variations have diminishing effect as one goes farther from the ultimate consumer in making measurements, one should expect decreasing numerical values of diversity factor as the power plant end of the system is approached. This is clear from the above table showing diversity factors between different elements of the power system.