With reference to the single-coil elementary DC Machine Armature Winding of Figs 5.13 and 5.14(a) which shows the B-wave of the machine relative to the elementary full-pitched coil, 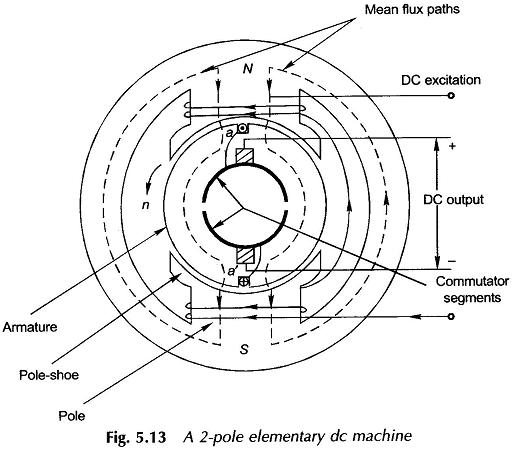 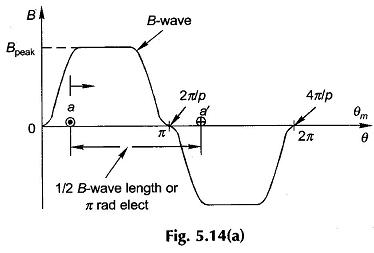 Consider that the coil is lying in the interpolar region so that the full flux/pole (Φ) links it positively. Let it now move through one pole-pitch (π  rad elect.) in time Δt so that its flux linkages reverse in sign. The change in flux linkages during this movement is

The dc machine armature is always wound with 2-layer winding forming a closed circuit. The coils are suitably connected to the commutator segments made of copper, insulated from each other and from the shaft and formed into a cylinder. The current from the armature winding is tapped through brushes placed on the commutator periphery, 180° elect. apart. The alternate brushes are of opposite polarity and all the brushes of one polarity are connected in parallel resulting in two armature terminals. This arrangement causes the closed armature winding to form a series-parallel circuit.

Let the machine be wound with Z conductors (a conductor is the active part of the side of a turn). Since two conductors form a turn,

Using Eq. (5.23), the armature emf which equals the parallel path emf is given by

Since P has a minimum value of 2, the wave winding will have a larger armature emf than a lap winding for the same values of Φ, n and Z.

The details of the dc machine winding, where the brushes are placed on the commutator and how the parallel paths are formed.

where Vt is the voltage at generator terminals. This equation is usually written as