Because of lower reluctance of the magnetic path corresponding to the teeth as compared to the slots, the flux density wave in the air-gap is Tooth Ripple in Armature Winding as shown in Fig. 6.9. Unlike the space harmonics of the B-wave which move at the same peripheral speed as the fundamental, the tufts of flux embracing the teeth move back and forth as the teeth move relatively past the pole-shoes. Since there is no net movement of B-wave ripple, no space harmonic is produced by these. 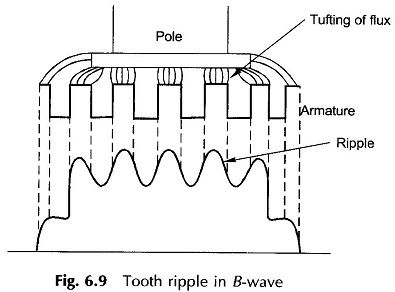 However, due to cyclic variation in reluctance of the magnetic path offered to the field poles by the toothed armature, the total flux/pole contains a space stationary but time-varying component. This effect is most pronounced when the pole-arc covers as integral plus one-half slot-pitches as illustrated in Figs 6.10 (a) and (b). The relative position of the armature and poles in Fig. 6.10(a) corresponds to low reluctance and maximum flux/pole and

Fig. 6.10(b) corresponds to high reluctance and minimum flux. It is thus seen that the flux has a stationary time-varying component. A complete cycle of flux variation occurs when the pole moves through one slot-pitch, while one cycle of the fundamental wave is generated when the poles move through two pole-pitches. Therefore, the Tooth Ripple in Armature Winding frequency in flux is 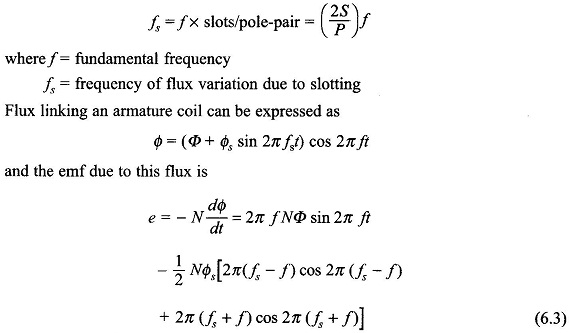 Thus, apart from the fundamental, the two frequencies present in the emf wave owing to armature slotting are