Shunted Armature Speed Control – It is a variation of rheostatic control. As is obvious from Fig. 7.59, the principle used in achieving control is that of voltage division.

In the shunt motor armature control circuit of Fig. 7.59(a) the Thevenin equivalent as seen by motor armature is drawn. The no-load armature speed is governed by VTH, which can be independently adjusted by the ratio R2/R1. The series resistance 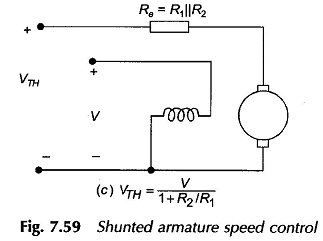 (Thevenin resistance) is Re= R1 || R2 is very small so the control circuit gives better speed regulation compared to the circuit arrangement of Fig. 7.58(a).

Similar arrangements apply for series motor potential divider control circuit of Fig. 7.58(b). In this case the motor no-load speed can be adjusted to finite reasonable value and so the scheme can be employed for production of low speeds at light loads.