The flux density wave of a synchronous machine is never exactly sine wave. Because of odd symmetry of poles (alternately north-south), the space Harmonic Analysis in Distributed Winding of the B-wave comprises odd harmonics only, which induce the corresponding harmonic emf s in the winding.

Figure 5.19 shows the fundamental B-wave, and its third-harmonic; because of somewhat flat-topped nature of the B-wave, its third-harmonic is of the “dipping” kind, producing a flux density dip in the middle of the main pole.

It follows from Fig. 5.19 that n poles of the nth harmonic occur in the space occupied by one pole of the fundamental. Thus, 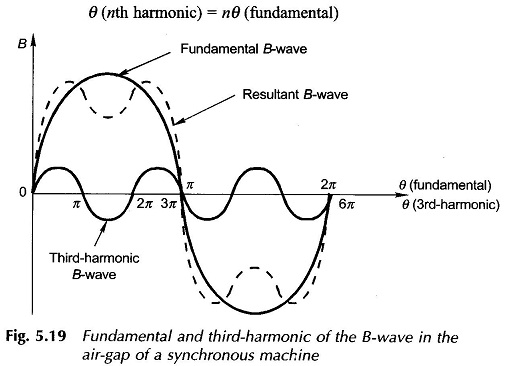 It can be easily shown that Kb (nth harmonic) is less than Kb (fundamental) for important harmonics resulting in reduction of harmonic content of the voltage of the distributed winding—an incidental advantage.