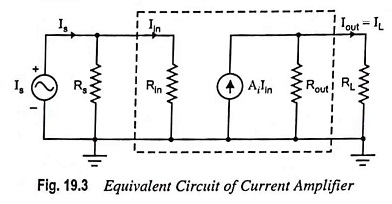 The equivalent circuit of a current amplifier is depicted in Fig. 19.3. In the given circuit if the input resistance Rin << Rs then Iin ≈ Is and if RL << Rout then IL = Iout = AiIin

An ideal current amplifiers is defined as an amplifier which provides an output current proportional to the signal current, and proportionality constant is independent of magnitudes of source and load resistances (Rs and RL respectively).