Approximate Equivalent Circuit of Transformer – In constant frequency (50 Hz) power transformers, approximate forms of the exact T-circuit equivalent of the transformer are commonly used. With reference to Fig. 3.14(c), it is immediately observed that since winding resistances and leakage reactances are very small, V1 ≈ E1 even under conditions of load. Therefore, the exciting current drawn by the magnetizing branch (Gi || Bm) would not be affected significantly by shifting it to the input terminals, i.e. it is now excited by V1 instead of E1 as shown in Fig. 3.16(a). It may also be observed that with this approximation, the current through R1, Xl1 is now I′2 rather than I1=I0+I′2 . Since I0 is very small (less than 5% of full-load current), this approximation changes the voltage drop insignificantly. Thus it is basically a good approximation. 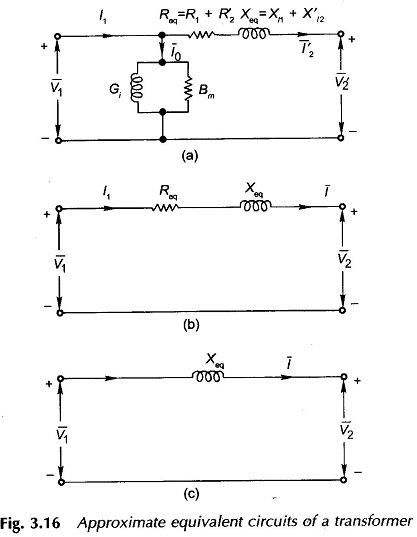 In computing voltages from the Approximate Equivalent Circuit of Transformer, the parallel magnetizing branch has no role to play and can, therefore, be ignored as in Fig. 3.16(b).

The Approximate Equivalent Circuit of Transformer offers excellent computational ease without any significant loss in the accuracy of results. Further, the equivalent resistance and reactance as used in the approximate equivalent circuit offer an added advantage in that these can be readily measured experimentally, while separation of Xl1 and Xl2 experimentally is an intricate task and is rarely attempted.