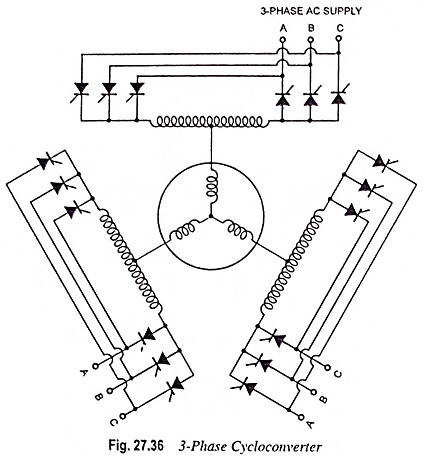 The operation of cycloconverter is characterized by several features. They are, generally, employed as step-down frequency converters. There is no fixed minimum ratio of input to output frequency; however, the output frequency is restricted typically to one-third or one-half of the input or line frequency. Below these ratios, the efficiencies of both the cycloconverters and motors supplied by them start falling significantly.

Reversibility is another feature of cycloconverter drive systems. A cycloconverter fed ac motor drive will respond to a change in polarity of the input signals by changing the direction of rotation of the motor without the use of contactors to reverse phase sequence.

The ability of cycloconverter to handle power flow in either direction is another important feature. This, together with the above mentioned reversibility feature, provides an induction motor drive capable of operating in any of the four quadrants of the motor’s speed-torque curve.

While the cycloconverter has many attractive features from a theoretical point of view, there are several limitations because of which they have not gained popularity. It needs more power semi­conductors than an inverter. For example, the three phase cycloconverter needs 18 thyristors, whereas the rectifier-inverter combination needs only 12 thyristors. Cycloconverters can pro­duce only a sub-frequency output. Line pollution with harmonics and low power factor can also be problems with cycloconverters of high power rating. However, recent advancements in fast switching devices have resulted into devices known as forced commutated direct frequency changers (FCDFC) which operate at high efficiency and have low harmonic content.

Cycloconverters drives are normally used for large size motors as the cost and complexity of the power and control circuits prohibit their use for general applications. Cycloconverters have been employed in diesel electric locomotives where a high frequency alternator coupled to the engine shaft provides power at the input. These have also been employed in gearless cement mill or ball mill drives.