Power Flow Transfer Equations – The flow of active and reactive power in a synchronous link will now be studied. The approach will be analytical and armature resistance will be considered for generality of results.

Figure 8.42 shows the schematic diagram of a synchronous generator wherein E̅f leads V̅t by angle δ. The synchronous impedance is

as shown by the impedance triangle of Fig. 8.38 wherein

The armature current in Fig. 8.42 can be expressed as

The complex power output is

Equating the real and imaginary parts of Eq. (8.51), the following expressions for real and reactive power output are obtained as

The net mechanical power input to the machine is given by

The real electrical power output, Pe, as per Eq. (8.54a) is plotted in Fig. 8.44 from which it is observed that its maximum value is 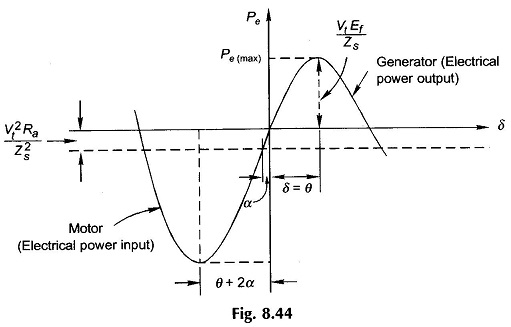 occurring at δ= θ, which defines the limit of steady-state stability. The machine will fall out of step for angle δ> θ. Of course, θ will be 90° if resistance is negligible in which case the stability limit will be at δ= 90° as already explained in Sec. 8.8

Since the angle δ in Eq. (8.57) is more than θ, the maximum mechanical power input (net) operation for a generator lies in the unstable region.

Figure 8.45 shows the operation of the synchronous machine as a motor*. Here the angle δ by which Ef lags Vt is defined as positive. Also the direction of power flow is now into the machine while the mechanical power flows out at the machine. 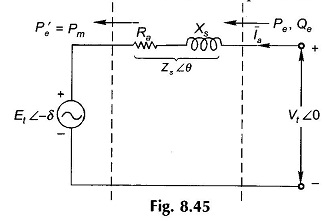 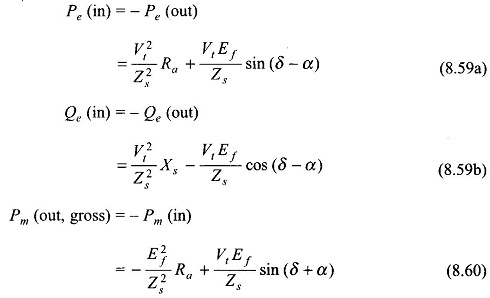 The maximum mechanical power output from Eq. (8.60) is given by

It occurs at δ = θ which defines the limit of steady-state stability. It is easily seen from Eq. (8.59a) that the maximum electrical power input occurs at δ = θ + 2α which lies outside the stability limit. The reader should compare these results with that of the generator.

For the case of negligible resistance

This result is easily verified from Fig. 8.32(b) for the upf phasor diagram.