A radian is defined as the angular distance measured along the circumference of a circle which is equal to the radius of the circle. One radian is equal to 57.3°. In a 360° revolution, there are 2π radians. The angular measurement of a sine wave is based on 360° or 2π radians for a complete cycle as shown in Figs. 4.6 (a) and (b).

The Phase of Sine Wave is an angular measurement that specifies the position of the sine wave relative to a reference. The wave shown in Fig. 4.7 is taken as the reference wave. 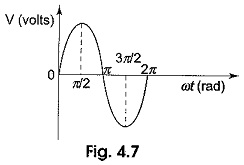 When the sine wave is shifted left or right with reference to the wave shown in Fig. 4.7, there occurs a phase shift. Figure 4.8 shows the phase shifts of a sine wave. 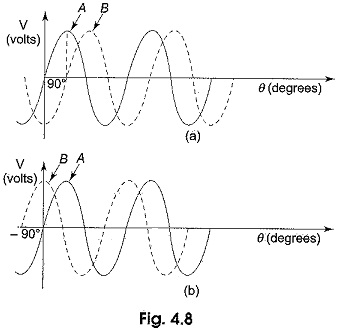