CMOS Circuit contain both NMOS and PMOS devices to speed the switching of capacitive loads. It consumes low power and can be operated at high voltages, resulting in improved noise immunity. Fig. 3.1 shows the basic CMOS Inverter Working Principle. 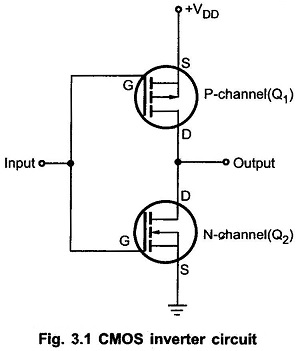 When input is LOW, the gate of Q1 (P-channel) is at a negative potential relative to its source while Q2 has VGS = 0 V. Thus, Q1 is ON and Q2 is OFF. This produces output voltage approximately +VDD, as shown in the Fig. 3.2 (b).