An Static Induction Transistor (SIT) is a high-power high-frequency device and is essentially the solid state version of triode vacuum tube. It was commercially introduced by Tokin Corp, Japan, in 1987. The device symbol is shown in Fig. 11.9. 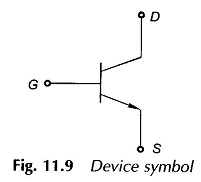 The triode-like characteristics make the device suitable, both in active and switching modes. The device has been used in audio, VHF/UHF and microwave amplifiers. The reliability, noise and radiation hardness of SIT are claimed to be superior to MOSFET.  This device is normally on, that is in the absence of any base signal the SIT conducts.