In a Single Phase Half Wave Controlled Rectifier only one SCR is used in the circuit. It is included in between the ac source the load. The transformer is used on the supply side in order to change the voltage level to suit the requirements. The performance of the controlled rectifier very much depends upon the type and parameters of the output (load) circuit.

Figure 27.1 (a) depicts the circuit diagram of a Single Phase Half Wave Controlled Rectifier with resistive load (triggering circuit not shown in the figure). The circuit is energized by the line voltage or transformer secondary voltage, ν = Vmax sin ωt. It is assumed that the peak supply voltage never exceeds the forward and reverse-blocking ratings of the thyristor. The thyristor can be triggered at any angle α in the positive half cycle and thus the output voltage can be controlled. The thyristor blocks during the negative half cycle. The various voltage and current waveforms for the Single Phase Half Wave Controlled Rectifier with resistive load circuit are shown in Fig. 27.1 (b). 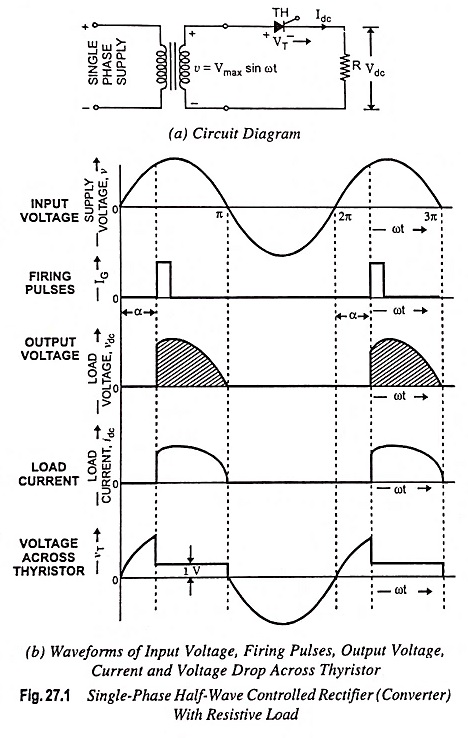 Analysis : Average load voltage is given by

where Vmax is the peak value of the ac input voltage.

From the above Eq. (27.1) it is obvious that the load voltage varies with firing angle α having extremes values for α = 0 and α = π or 180°. The maximum output voltage is obtained when α = 0 and is given by

Average load current, with resistive load, is directly proportional to the average load voltage and is given by

The rms value of load voltage is given by 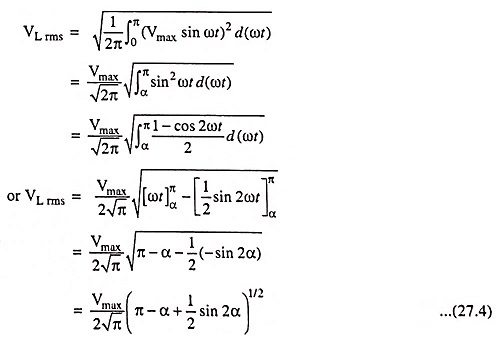 Average output power is given by

RMS value of output power is given by

Rectification efficiency is defined as the ratio of average output power, Pdc and the output ac power which is equal to rms value of output power PL rms

The output of a rectifier is not a pure sinusoidal wave—it contains harmonics present in the output which are responsible for generation of heat in the load.

If the load consists of a resistance and inductance then the output current waveform will be different from that obtained with a pure resistive load. The circuit diagram for a Single Phase Half Wave Controlled Rectifier with R-L load is shown in Fig. 27.2 (a). The circuit is the same as that of Fig. 27.1 (a) except that the load in this case is a combination of resistance and inductance. The waveforms for voltage and current of Single Phase Half Wave Controlled Rectifier with an inductive load are shown in Fig. 27.2 (b). 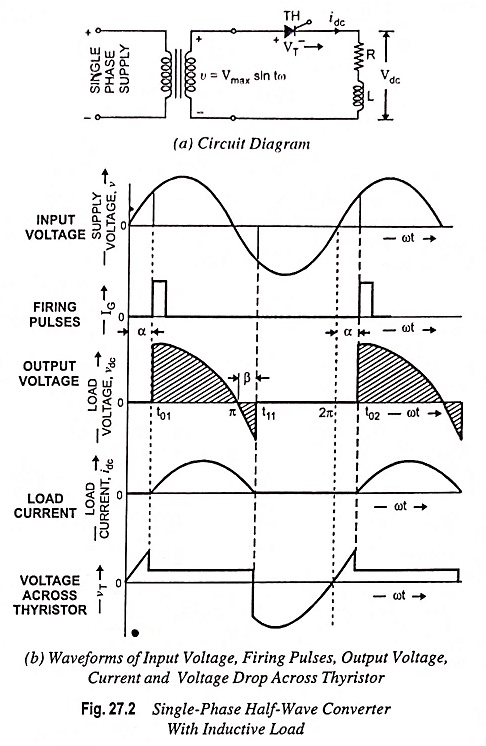 At the instant t01, when the thyristor is triggered, the load current will increase gradually, due to inductive nature of load, in a finite time. The supply voltage from this instant appears across the load. Energy is stored in inductor during time interval from t01 to π. At the time instant π, the supply voltage reverses, but the thyristor keeps conducting. This is due to the fact that current through the inductance cannot be suddenly reduced to zero. During negative voltage half cycle, current continues to flow till the energy stored in the inductance is dissipated in the load resistor and a part of energy is supplied back to the source. As the current reaches zero, the thyristor is turned off automatically and regains its blocking capability. Thus, due to energy stored in inductor, current continues to flow up to instant t11. At time instant t11, the load current become zero and the thyristor turns off.

At the time instant t02, when again pulse is applied, the above cycle repeats. Hence the effect of the inductive load is increase in the conduction period of the SCR.

The half-wave circuit is not normally used since it produces a large output voltage ripple and is incapable of providing continuous load current.

The average value of load voltage can be derived as

Comparing Eqs. (27.2) and (27.11) it is revealed that average load voltage is reduced in case of inductive load. 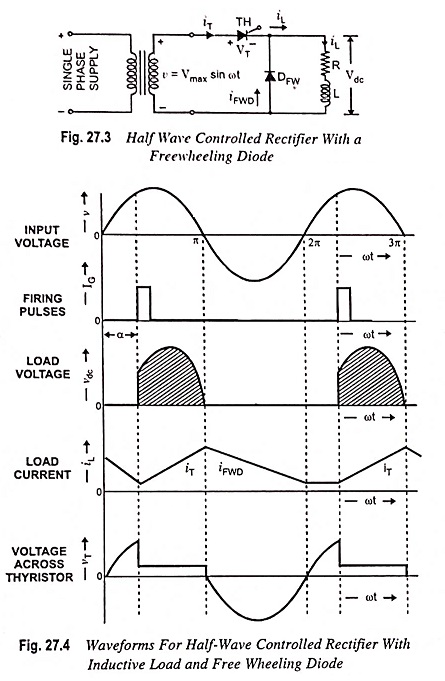 The load voltage and current waveforms are depicted in Fig. 27.4.

The voltage induced in the inductance, during the positive half cycle, will change its polarity as the di/dt changes its sign and freewheeling diode DFW will start conducting as soon as the induced voltage is of sufficient magnitude, thereby enabling the inductance to discharge its stored energy into the resistance.