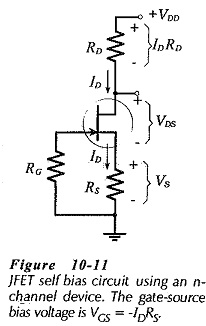 The fact that ID determines VGS, and that VGS sets the ID level, means that there is a feedback effect tending to control ID. Thus, if ID increases when the device is changed, the increased voltage across RS results in an increased (negative) gate-source voltage that tends to reduce ID back toward its original level. Similarly, a fall in ID produces a reduced VGS which tends to increase ID toward its original level. 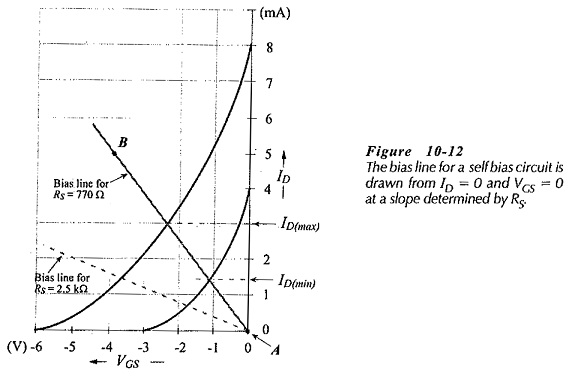 Summing the voltage drops across RD, RS, and the FET drain-source terminals in Fig. 10-11 gives,

Equation 10-5 may be used to calculate the maximum and minimum levels of VDS when ID(max) and ID(min) have been determined.

Self-Bias for a p-channel JFET: 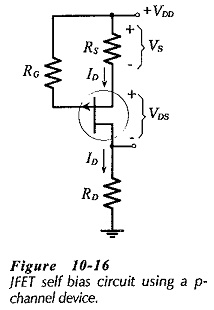 A Self Bias Circuit Diagram using a p-channel JFET is shown in Fig. 10­-16. The gate-source bias voltage is once again provided by the voltage drop across source resistor RS. In this case, the source is negative with respect to the supply voltage (+VDD). Because the gate is connected to +VDD via RG, the gate is is positive with respect to the source terminal. The positive level of VGS provides the reverse bias at the gate-channel junctions of the p-channel FET. A p-channel Self Bias Circuit Diagram can be analyzed in exactly the same way as an n-channel circuit.