Centralized Switched Telephone Network – As data systems have increased in number and complexity, it has become increasingly important to provide for their proper and orderly interconnection. Small, simple systems could dedicate individual lines for each piece of equipment which was connected in the system. For intraplant connections, this was a practical method; the lines were short and could be installed by the data system user. Leasing was not involved and installation costs were relatively low.

Dedicated lines for each user become less feasible for out-of-plant operations. Such systems normally lease capacity in existing transmission facilities of telephone carriers. Using many full-time dedicated lines for extended periods would result in unacceptable costs, since few remote locations require full-time interconnection with other sites. More typically, connections between sites are established for short periods to obtain and convey data, while the rest of the time is spent interpreting, updating or otherwise processing the data locally. Modem data systems depend on network techniques of interconnection to reduce the expense of data transfer. 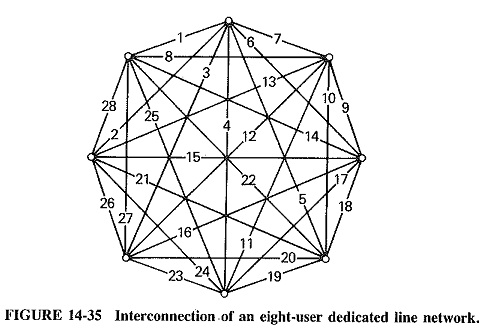 The efficiency of networking for data users who do not require full-time interconnection can be illustrated by a simple example. A system consisting of eight data user sites which require interconnection at various times would, as shown in Figure 14-35, require 28 dedicated lines to connect each user site with every other one. This may also be calculated from a simple formula. Noting that the first user must be connected to seven others, the second one to six (he or she already has a connection to the first one), the third one to five, and so on, we deduce that:

U = number of sites

It may also be shown that: 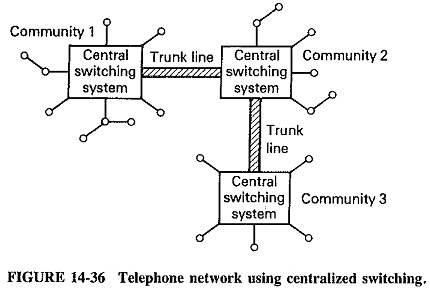 Since the central switch of each centralized network distributes the data between that network and other networks, this type of system is called a distributed network. For computer systems, the centralized facilities may consist of large computers which interconnect to permit users access to any of the computers. This type of arrangement can greatly improve the efficiency of the computers by making a computer which is underused by its local subscribers available to subscribers from computer centers which are in heavy demand at that time. The routes which interconnect the centers are normally capable of rapid transfer of large quantities of data, whereas the lines from users to the central offices do not need to convey these large amounts of data and can therefore be less expensive lines. Data flow within networks is carefully controlled through system protocols to ensure maximum efficiency and minimum interference between users. Network switching systems, line types and network protocols are important considerations for data transmission.