Buchholz Relay is a gas-actuated relay installed in oil immersed transformers for protection against all kinds of faults. Named after its inventor, Buchholz, it is used to give an alarm in case of incipient (i.e. slow-developing) faults in the transformer and to dis­connect the transformer from the supply in the event of severe internal faults. It is usually installed in the pipe connecting the conservator to the main tank as shown in Fig. 22.11. It is a universal practice to use Buchholz relays on all such oil immersed transformers having ratings in excess of 750 kVA. 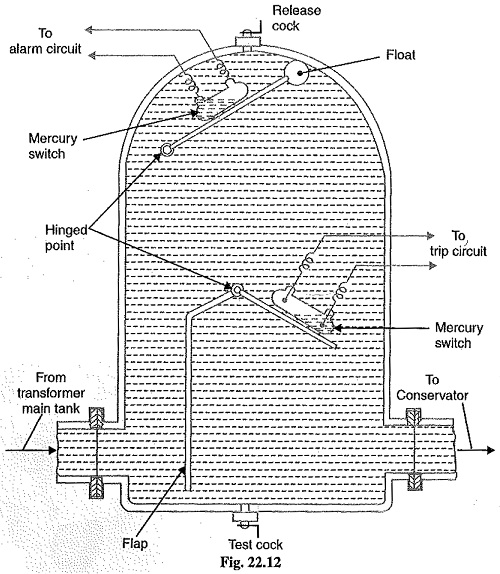 Construction: Fig. 22.12 shows the constructional details of a Buchholz relay. It takes the form of a domed vessel placed in the connecting pipe between the main tank and the conservator. The device has two elements. The upper element consists of a mercury type switch attached to a float. The lower element contains a mercury switch mounted on a hinged type flap located in the direct path of the flow of oil from the transformer to the conservator. The upper element closes an alarm circuit during incipient faults whereas the lower element is arranged to trip the circuit breaker in case of severe internal faults.

Operation: The operation of Buchholz relay is as follows :

(i) In case of incipient faults within the transformer, the heat due to fault causes the decomposition of some transformer oil in the main tank. The products of decomposition contain more than 70% of hydrogen gas. The hydrogen gas being light tries to go into the conservator and in the process gets entrapped in the upper part of relay chamber. When a pre­determined amount of gas gets accumulated, it exerts sufficient pressure on the float to cause it to tilt and close the contacts of mercury switch attached to it. This completes the alarm circuit to sound an alarm.

(ii) If a serious fault occurs in the transformer, an enormous amount of gas is generated in the main tank. The oil in the main tank rushes towards the conservator via the Buchholz relay and in doing so tilts the flap to close the contacts of mercury switch. This completes the trip circuit to open the circuit breaker controlling the transformer.