Transductor Relay – Since relays now have to perform much more complicated functions, many types tend to become very complex mechanically, and hence costly, to make and difficult to test and to maintain. The transductor controlling a simple slave relay, makes it possible to reduce a complex electromechanical device which operates in accordance with the interaction of fluxes and currents in a fully predictable way. 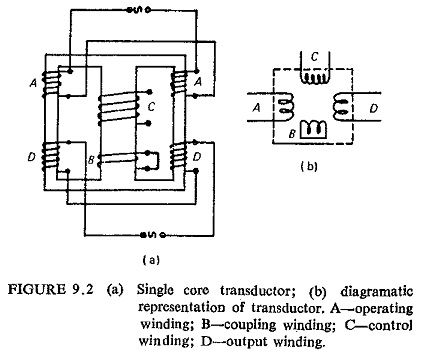 A transductor comprises essentially a magnetic core on which there are two groups of windings, usually known respectively as the operating wind­ings and control windings. Each group may comprise only one winding but if there is more than one winding in a group all those windings are magnetically linked. On the other hand the windings of the different groups are not magnetically linked. The operating windings are energized with a.c. and control windings are energized with d.c.

A transductor operates so as to present a variable impedance to currents flowing in the operating windings the magnitude of this impedance being varied by the current in the control winding. Figure (9.2) shows a single core transductor.

If used as an amplitude comparator it is limited in its sensitivity by the sensitivity of the slave relay in its output circuit; if used as a phase comparator to obtain greater sensitivity it is dependent upon an external a c. supply which is sometimes difficult to arrange. 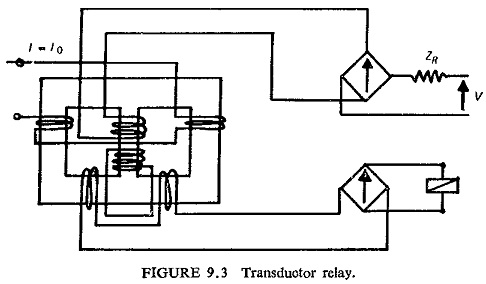 Figure (9.3) shows a transductor relay where the restraining voltage is applied to the control winding through an impedance ZR and a rectifier. The restraining current thus obtained is rectified and partially smoothed by the short-circuit effect of the rectifier on control winding and also due to the short circuited coupling winding. The effect of this is to drive both the limbs on which the operating winding is wound into saturation.

The slave relay current is very low until the above mentioned condition exists. Then it suddenly increases and becomes very large for a small value of operating current. For this reason a heavy duty of telephone type of relay is used with large setting. Due to smoothing and rectifying a signal, a delay is introduced because of the time constant of the smoothing circuit and hence the operating speed is slow.

Transductor Relay are mechanically very simple and although some of them may appear to be a little complicated electrically, this does not affect their reliability adversely, since their operation is mainly dependent on static components whose characteristics are easily predetermined and checked. As a result they are easier to construct and test than electromechanical relays and their maintenance is practically negligible.