Advantage and Disadvantage of Stepper Motors:

Advantage and Disadvantage of Stepper Motors are as follows;

These are important to know for, the proper use of stepper motors and are shown in Fig. 8.8. As the stepping rate is increased, rotor has less time available to drive the load from one position to the next. Beyond a certain pulsing rate, rotor cannot follow the command and begins to miss pulses. 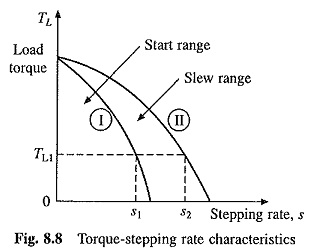 Slew range is useful for speed control and it is not suitable for position control. At the stepping rate corresponding to slew range, the motor cannot be started or reversed without losing steps. To attend slewing speed, whether from rest or from bidirectional mode, the motor must first be accelerated carefully using a lower pulse rate.

Similarly, to stop or to reverse in slewing range, motor must first be carefully decelerated to some speed within its bidirectional capability. Such acceleration and deceleration operation without losing any step is called ramping.