In the United States, a recent FCC ruling, in part 68 of the Rules and Regulations, permits for the first time non-telephone company interconnection to telephone company circuits. This ruling has placed the responsibility for much of the necessary Interconnection of Data Circuits on the manufacturer of data equipment, which must be registered with the FCC.

Three types of customer equipment have been identified by the new rules:

Each of these data sets interfaces with telephone company supplied jacks, whose type is determined by the type of data set to be connected.

The permissive data set provides a maximum output level of -9 dBm, while the guideline is that the circuit signal level must not exceed -12 dBm. Since the standard line loss of a business loop is 3 dB, the permissive data set can be used with any of three jacks supplied by U.S. telephone companies, including the standard voice jack, RJ11C, which includes no provision for signal attenuation.

The fixed-loss-loop data set can have a maximum of -4 dBm signal level. This type of data set requires connection to a universal jack, RJ41S, which includes an adjustable resistive pad to limit output to the required -12 dBm as measured at the time of installation. Measurement of signal level will include loop losses. 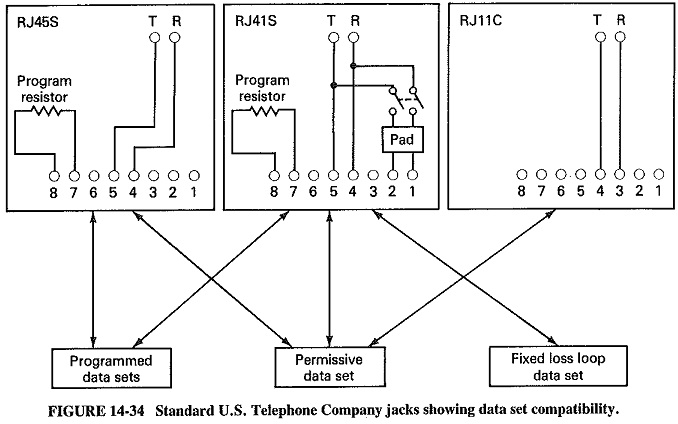 A non-registered data set can be connected to a telephone circuit in the United States, but it must employ a registered protective device to interface with one of the standard jacks described above (see Figure 14-34).