Commutating Capacitor or Speed up Capacitor:

Whenever a triggering pulse is applied to change the bistable state from one bistable state to another, it is necessary that the transition period should be minimum and it should require minimum but finite amount of energy. First requirement of the triggering process is to bring the transistors into active region i.e., the cut-off and the saturated transistors operating point should be shifted to active region. For expedition of this process, it is necessary that the closed-loop gain should be much more than unity during the transition phase. By connecting capacitors of picofarad range across R1 and R2, this objective can be achieved.

For transient they act as short circuit, and increases the regenerative feedback gain by bypassing the resistor across which the respective capacitor is connected. Secondly these capacitors supply the excess charge in the base, required to bring the off transistor to active region.

Similarly to turn off a transistor, the excess charge stored in the base region is to be withdrawn. The capacitors achieve this objective as well, if the value is appropriately chosen.

Such capacitors, which assist in transfer of conduction from one transistor to another, are known as Commutating Capacitor or Speed up Capacitor.

Some of the switching times associated with the state-change-­over process are defined below:

Transition Time: It is defined as the time duration after the application of trigger pulse, during which the conduction is transferred from the off transistor to the on transistor. The commutating capacitor reduces the transition time by (i) increasing the closed-loop gain during the transient phase by acting as short circuit, (ii) by supplying the required excess charge to the base of off transistor by impulsive current flow at the instant of triggering and (iii) by withdrawing the excess charge from the base of the saturated transistor so as to reduce the storage time.

It has been further observed that the transition time can also be reduced by the trigger pulse duration slightly in excess of the minimum duration required. 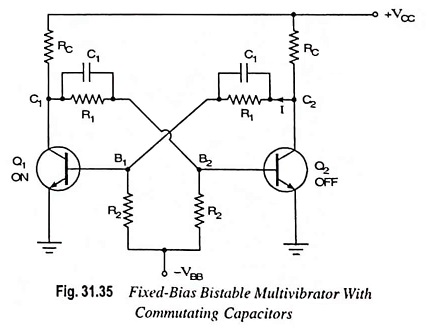 Let us assume that when the power supply is switched on, Q1 is turned on and Q2 is off. Let now a negative pulse of short duration and sufficient magnitude be applied to the base of tran­sistor Q1. This reduces the forward bias on the transistor Q1 and causes a reduction in collector current and, thereby, increase in potential of its collector terminal C1. For proper operation this rising voltage is to be transmitted to the base of Q2 without delay.

The maximum frequency of operation is given as

The resolution time of bistable multivibrator can be improved by