A preliminary check up of various equipment is made before the actual Circuit Breaker Testing Procedure commences. The correct values of resistance and reactance coils are inserted as per the magnitude of the short-circuit current. Proper settings of transformers are made. The measuring circuits are connected and oscillograph loops are calibrated.

The succession of operations carried out during the test, is governed by the drum. To begin with, the main and the exciting machinery are started, the generator is excited, isolating switches are disconnected which previously have been earthed.

The button is then pressed and the control drum begins to rotate, setting into motion individual devices and machines. The following is an example of automatic sequence of operation during a Circuit Breaker Testing Procedure.

These operations take place in very short time, about 0.2 second. After the completion of short circuit the starters of the driving motors of the short-circuit generator and the exciting machines are automatically reset to a lower degree. 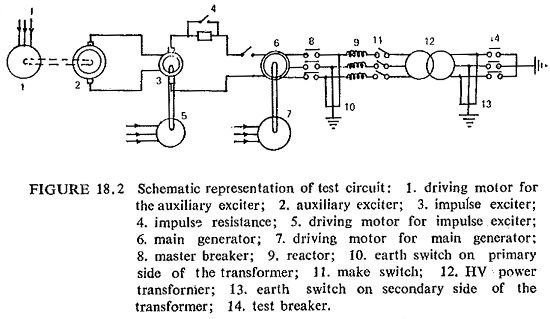 The motors are then switched on and are allowed to run at full speed, so that in a short time a further short circuit can be initiated. A schematic representation of test circuit is shown in Fig. (18.2).