Two chief difficulties which do not warrant the Transformer Testing Methods by direct load test are:

Thus performance characteristics of a transformer must be computed from a knowledge of its equivalent circuit parameters which, in turns, are determined by conducting simple tests involving very little power consumption, called nonloading tests. In these tests the power consumption is simply that which is needed to supply the losses incurred. The two nonloading tests are the open-circuit (OC) test and short-circuit (SC) test.

In both these tests voltage, current and power are measured, from which the resistance and reactance of the input impedance can be found, as seen in each test. Thus only four parameters can be determined which correspond to the approximate equivalent circuit of transformer of Fig. 3.16(b).

Before proceeding to describe OC and SC tests, a simple test will be advanced for determining similar polarity ends on the two windings of a transformer.

Similar polarity ends of the two windings of a transformer are those ends that acquire simultaneously positive or negative polarity of emf’s induced in them. These are indicated by the dot convention as illustrated already. Usually the ends of the LV winding are labelled with a small letter of the alphabet and are suffixed 1 and 2, while the HV winding ends are labelled by the corresponding capital letter and are suffixed 1 and 2 as shown in Fig. 3.19. The ends suffixed 2 (a2, A2) have the same polarity and so have the ends labelled 1 (a1, A1).

The above method of polarity Transformer Testing Methods may not be convenient in field testing of a transformer. Alternatively the polarity Transformer Testing Methods can be easily carried out by a dc battery, switch and dc voltmeter (permanent magnet type which can determine the polarity of a voltage) as shown in the simple setup of Fig.3.19(b). As the switch on the primary side is closed, the primary current increases and so do the flux linkages of both the windings, inducing emfs in them.

The positive polarity of this induced emf in the primary at the end to which the battery is connected (as per Lenz’s law). The end of secondary which (simultaneously) acquires positive polarity (as determined by the dc voltmeter) is the similar polarity end. The reverse happens when the switch is opened, i.e. the similar polarity end of the secondary is that end which acquires negative potential.

The purpose of this test is to determine the shunt branch parameters of the equivalent circuit of transformer (Fig. 3.14(c)). One of the windings is connected to supply at rated voltage, while the other winding is kept open-circuited. From the point of view of convenience and availability of supply the test is usually performed from the LV side, while the HV side is kept open circuited as shown in Fig. 3.20. If the transformer is to be used at voltage other than rated, the test should be carried out at that voltage. Metering is arranged to read.

Figure 3.21(a) shows the equivalent circuit as seen on open-circuit and its approximate version in Fig. 3.21(b). Indeed the no-load current I0 is so small (it is usually 2-6% of the rated current) and R1 and X1 are also small, that V1 can be regarded as = E1 by neglecting the series impedance. This means that for all practical purposes the power input on no-load equals the core (iron) loss i.e.,

The shunt branch parameters can easily be determined from the three readings (Eq. (3.36)) by the following circuit computations and with reference to the no-load phasor diagram of Fig. 3.4.

It then follows that

It is, therefore, seen that the OC test yields the values of core-loss and parameters of the shunt branch of the equivalent circuit.

This test serves the purpose of determining the series parameters of a transformer. For convenience of supply arrangement and voltage and current to be handled, the test is usually conducted from the HV side of the transformer, while the LV is short-circuited as shown in Fig. 3.22.

While conducting the SC test, the supply voltage is gradually raised from zero till the transformer draws full-load current. The meter readings under these conditions are: 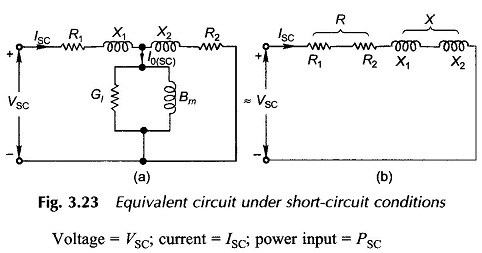 Since the transformer is excited at very low voltage, the iron-loss is negligible (that is why shunt branch is left out), the power input corresponds only to the copper-loss, i.e.

From the equivalent circuit for Fig. 3.23(b), the circuit parameters are computed as below:

It is to be observed that the SC test has given us the equivalent resistance and reactance of the transformer, it has not yielded any information for separating these into respective primary and secondary values.

It was observed that OC and SC tests together give the parameters of the approximate equivalent circuit of Fig. 3.16(b) which as already pointed out is quite accurate for all important computations.