The 8259 Programmable Interrupt Controller requires two types of command words. Initialization Command Words (ICWs) and Operational Command Words (OCWs). The 8259 Programmable Interrupt Controller can be initialized with four ICWs; the first two are compulsory, and the other two are optional based on the modes being used. These words must be issued in a given sequence. After initialization, the 8259A can be set up to operate in various modes by using three different OCWs; however, they are not necessary to be issued in a specific sequence. Refer Fig. 14.75 for initialization flowchart. 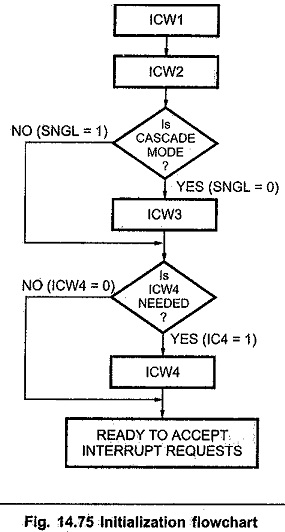 Fig. 14.76 shows the Initialization Command Word 1(ICW1). A write command issued to the 8259 with A0 = 0 and D4 = 1 is interpreted as ICW1, which starts the initialization sequence. It specifies, 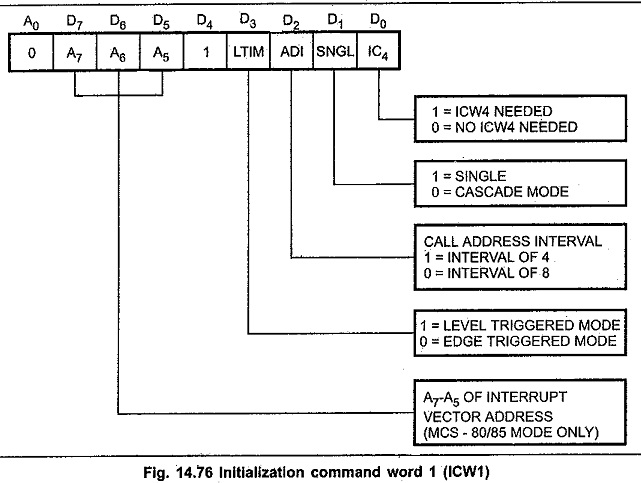 A write command following ICW1, with A0 = 1 is interpreted as ICW2. This is used to load the high order byte of the interrupt vector address of all the interrupts.

ICW3 is required only if there is more than one 8259 in the system and if they are cascaded. An ICW3 operation loads a slave register in the 8259 Programmable Interrupt Controller. The format of the byte to be loaded as an ICW3 for a master 8259 or a slave is shown in the Fig. 14.78. For master, each bit in ICW3 is used to specify whether it has a slave 8259 attached to it on its corresponding IR (Interrupt Request) input. For slave, bits D0 – D2 of ICW3 are used to assign a slave identification code (slave ID) to the 8259 Programmable Interrupt Controller. 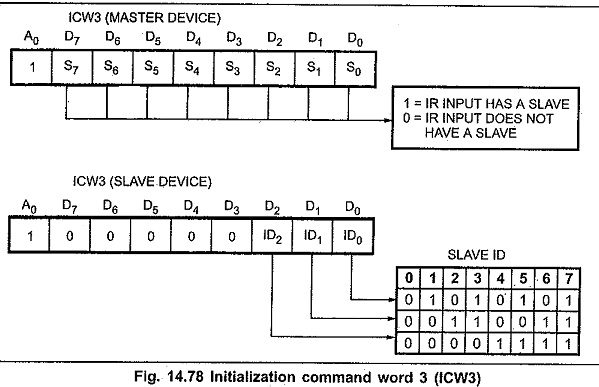 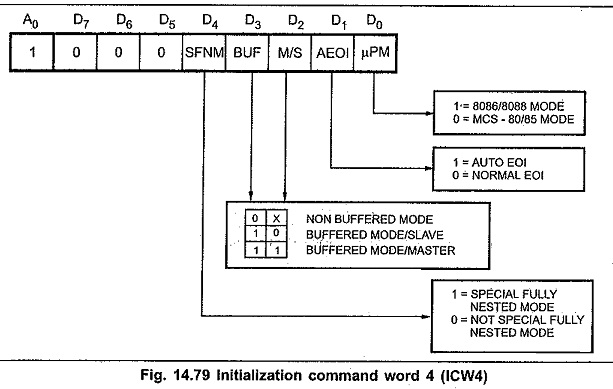 After initialization, the 8259 Programmable Interrupt Controller is ready to process interrupt requests. However, during operation, it might be necessary to change the mode of processing the interrupts. Operation Command Words (OCWs) are used for this purpose. They may be loaded anytime after the initialization of 8259 to dynamically alter the priority modes.

A Write command to the 8259 with A0 = 1 (after ICW2) is interpreted as OCW1. OCW1 is used for enabling or disabling the recognition of specific interrupt requests by programming the IMR.

A Write command with A0 = 1 and D4 D3 = 00 is interpreted as OCW2. The R (Rotate), SL (Select-Level), EOI bits control the Rotate and End Of Interrupt Modes and combinations of the two. Fig. 14.81 shows the Operation Command Word format. L2-L0 are used to specify the interrupt level to be acted upon when the SL bit is active. 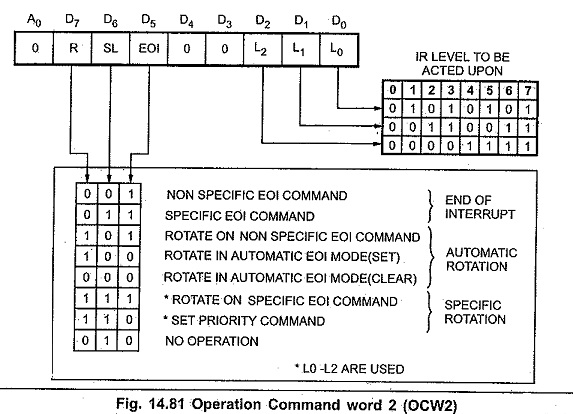 OCW3 is used to read the status of the registers; and to set or reset the Special Mask and Polled modes. Fig. 14.82 shows format of operation command word 3. 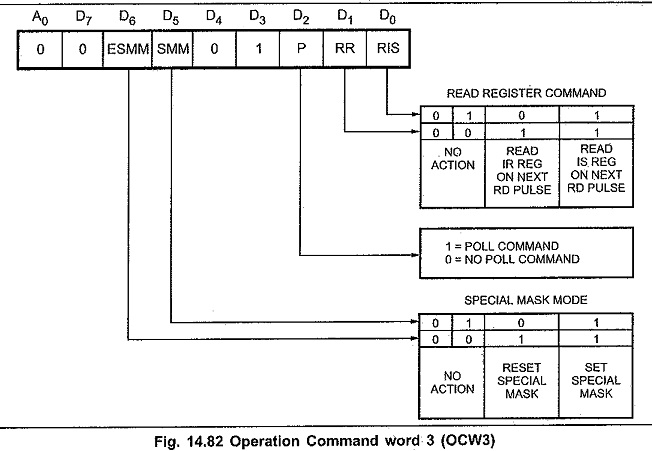 When the 8259 is not in the Polled mode, after it is set up for. an IRR status read operation, all Read commands with A0=1 cause the 8259 to send the IRR status word.

An OCW3 with RR = 1 and ISR = 1 sets up the 8259 for a status read of the Interrupt-Service Register. A subsequent read command issued to the 8259 will cause the 8259 to send the contents of the ISR onto the data bus.

A Read command issued to the 8259 Programmable Interrupt Controller with A0 = 1 (with RD, CS = 0 ) causes the 8259 to put the contents of the Interrupt Mask Register on the data bus. OCW3 is not required for a status read of the IMR.