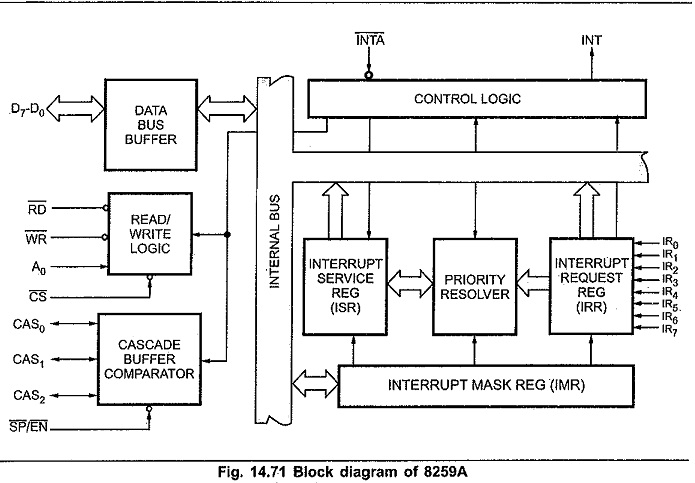 The RD and WR inputs control the data flow on the data bus when the device is selected by asserting its chip select (CS) input low.

This block has an input and an output line. If the 8259A is properly enabled, the interrupt request will cause the 8259A to assert its INT output pin high. If this pin is connected to the INTR pin of an 8085 and if the 8085 Interrupt Enable (IE) flag is set, then this high signal will cause the 8085 to respond INTR as explained earlier.

The IRR is used to store all the interrupt levels which are requesting the service. The eight interrupt inputs set corresponding bits of the Interrupt Request Register upon service request.

The Interrupt Service Register (ISR) stores all the levels that are currently being serviced.

Interrupt Mask Register (IMR) stores the masking bits of the interrupt lines to be masked. This register can be programmed by an Operation Command Word (OCW). An interrupt which is masked by software will not be recognised and serviced even if it sets the corresponding bits in the IRR.

The priority resolver determines the priorities of the bits set in the IRR. The bit corresponding to the highest priority interrupt input is set in the ISR during the INTA input.

This section generates control signals necessary for cascade operations. It also generates Buffer-Enable signals. As stated earlier, the 8259 Block Diagram can be cascaded with other 8259s in order to expand the interrupt handling capacity to sixty-four levels. In such a case, the former is called a master, and the latter are called slaves. The 8259 can be set up as a master or a slave by the SP/EN pin.

For a master 8259, the CAS0-CAS2 pins are output pins, and for slave 8259, these are input pins. When the 8259 is a master (that is, when it accepts interrupt requests from  other 8259s), the CALL opcode is generated by the Master in response to the first INTA. The vector address must be released by the slave 8259. The master sends an identification code of three-bits to select one out of the eight possible slave 8259s on the CAS0-CAS2 lines. The slave 8259s accept these three signals as inputs (on their CAS0 – CAS2 pins) and compare the code sent by the master with the codes assigned to them during initialization. The slave thus selected (which had originally placed an interrupt request to the master 8259)  then puts the address of the interrupt service routine during the second and third INTA pulses from the CPU.

The SP/EN signal is tied high for the master. However it is grounded for the slave.

In large systems where buffers are used to drive the data bus, the data sent by the 8259 in response to INTA cannot be accessed by the CPU (due to the data bus buffer being disabled). If an 8259 is used in the buffered mode (buffered or non-buffered modes of operation can be specified at the time of initializing the 8259), the SP/EN pin is used as an output which can be used to enable the system data bus buffer whenever the data bus outputs of 8259 are enabled (i.e. when it is ready to send data).

The events occur as follows in an 8085 system :

Operating Modes of 8259 and Features of 8259 Microprocessor:

The various Operating Modes of 8259 Programmable Interrupt Controller are :

After initialization, the 8259A operates in fully nested mode so it is called default mode. The 8259 continues to operate in the Fully Nested Mode until the mode is changed through Operation Command Words. In this mode, IR0 has highest priority and IR7 has lowest priority. When the interrupt is acknowledged, it sets the corresponding bit in ISR. This bit will inhibit all interrupts of the same or lower level, however it will accept higher priority interrupt requests. The vector address corresponding to this interrupt is then sent. The bit in the ISR will remain set until an EOI command is issued by the microprocessor at the end of interrupt service routine. But if AEOI (Automatic  End  Of Interrupt) bit is set, the bit in the ISR resets at the trailing edge of the last INTA .

If the AEOI mode is set, the 8259 Block Diagram will perform a non-specific EOI on its own on the trailing edge of The third INTA pulse. The AEOI mode can only be used for a master 8259 and not for a slave.

The Special Fully Nested Mode (SFNM) is used to avoid this problem. The SFNM is set up by ICW4 during initialisation. It is similar to the FNM except for the following differences:

The Rotating Priority mode can be set in (i) Automatic Rotation, and (ii) Specific Rotation.

For example if the lowest priority is assigned to IR2, other priorities are as shown below.

If any interrupt is in service, then the corresponding bit is set in ISR and the lower priority interrupts are inhibited. Some applications may require an interrupt service routine to dynamically alter the system priority structure during its execution under software control. For example, the routine may wish to inhibit lower priority requests for a portion of its execution but enable some of them for another portion. In these cases, we have to go for special mask mode. In the special mask mode it inhibits further interrupts at that level and enables interrupts from all other levels (lower as well as higher) that are not masked. Thus any interrupt may be selectively enabled by loading the mask register.

I = 1 —> One or more interrupt requests activated.

I = 0 —> No interrupt request activated.