8255 is a programmable peripheral interface IC and is a multiport input/output device. This is a general-purpose programmable I/O device, which may be used with many different microprocessors. There are 24 I/O pins, which may be individually programmed in 2 groups of 12 and used, in 3 major modes of operation. The I/O ports can be programmed in a variety of ways as per requirement of the programmer. The fea­tures of 8255A Programmable Peripheral Interface device are given below:

Features of 8255A Programmable Peripheral Interface

Architecture of Intel 8255A 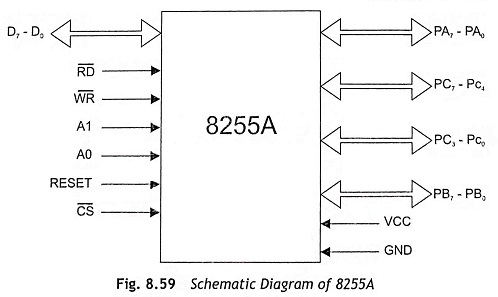 The schematic and pin diagrams of Intel 8255A Programmable Peripheral Interface are shown in Fig. 8.59 and Fig. 8.60 respectively. It is a 40-pin. IC package and operates on a single +5 V dc supply. The 8255A Programmable Peripheral Interface has 24 I/O pins, which may be individually programmed in two groups of twelve input/output lines or three groups of eight lines. The two groups of I/O pins are called Group A and Group B. Each group contains a subgroup of eight bits known as 8-bit port and a subgroup of four bits known as 4-bit port. This IC has three eight-bit ports: Port A (PA7-PA0), Port B (PB7-PB0), and Port C (PC7-PC0). Port C is divided into subgroups such as Port C upper, (PC7-PC4) and Port C lower, (PC3-PC0). Group A consists of Port A and Port C upper. Group B consists of Port B and Port C lower. The internal block diagram of 8255 is depicted in Fig. 8. 61. The pins for various ports are as follows: 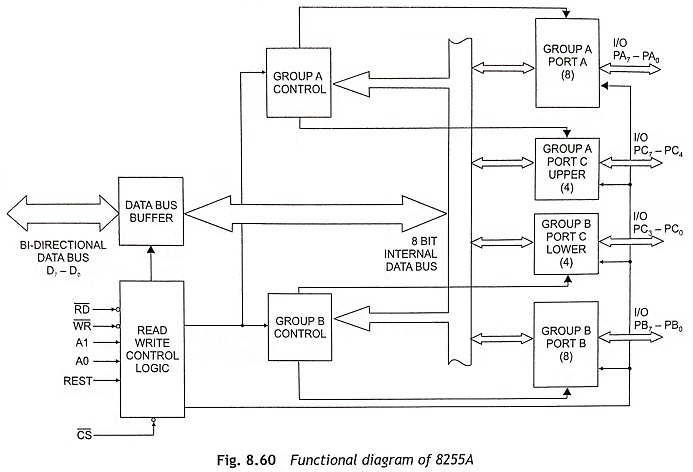 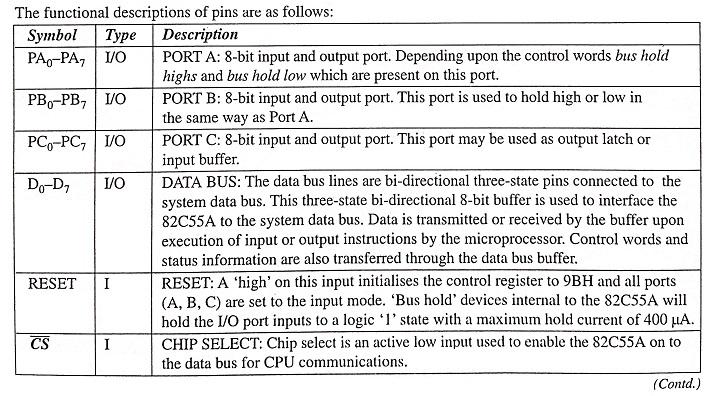 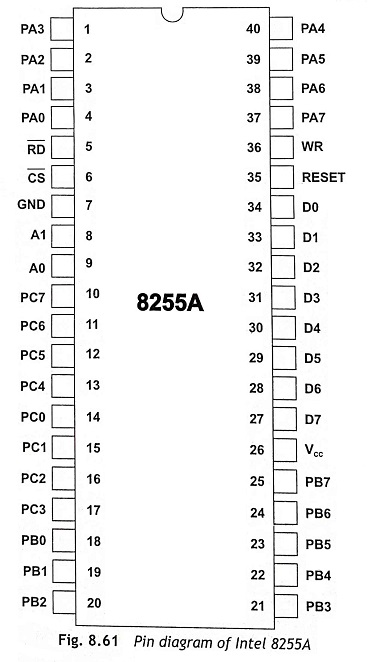 Group A and Group B Controls

The control word register can be both written and read as shown in the ‘Basic Operation’ Table 8.13. The control word format for both read and write operations is depicted in Fig. 8.62. When the control word is read, the bit D7 will always be a logic ‘1’, as this implies control-word mode information. 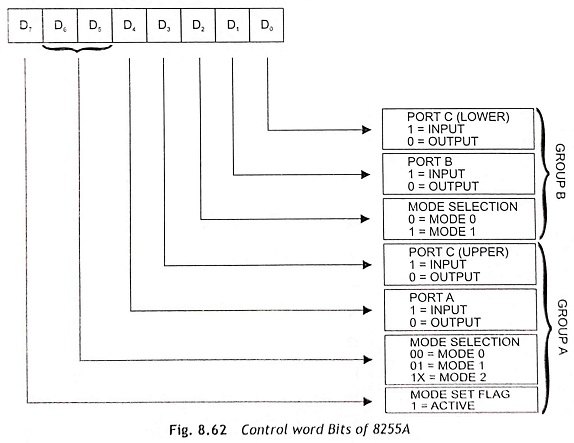 There are three basic modes of operation of 8255 as follows:

The system software can select the mode of operation. When the reset input becomes `high’, all ports will be set to the input mode with all 24-port lines held at logic ‘one’ level by internal bus hold devices. When the reset is removed, the 82C55A can remain in the input mode with no additional initialization required. This eliminates the need to pull up or pull down resistors in all CMOS designs. Then the control word register will contain 9B H. During the execution of the system program, any of the other modes may be selected using a single output instruction. This allows a single 82C55A to service a variety of peripheral devices with a simple software maintenance routine. Any port programmed as an output port is initialized to all zeros when the control word is written. 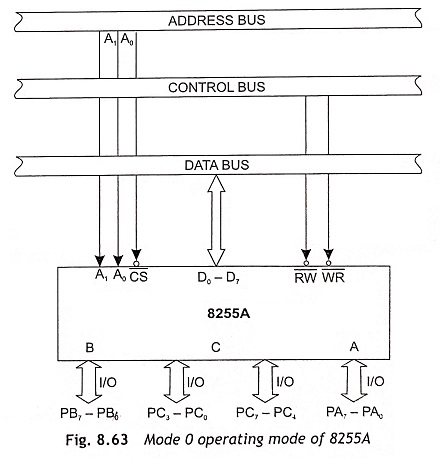 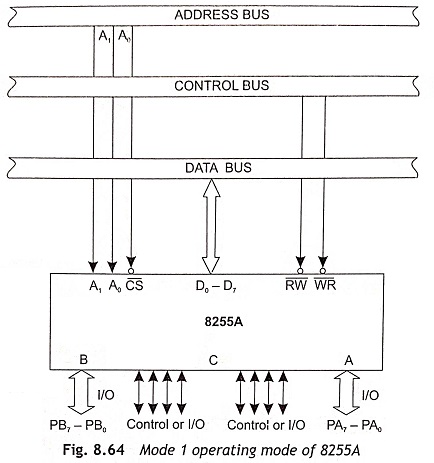 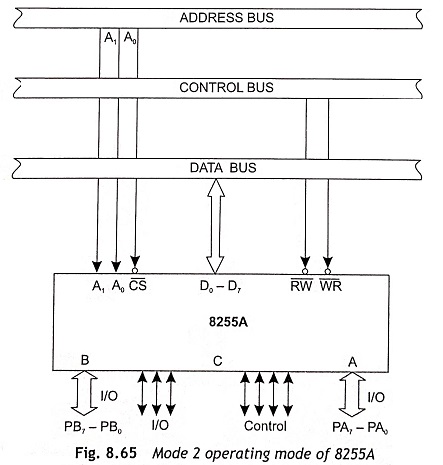 Mode 0-Basic input/Output This functional configuration provides simple input and output operations for each of the three ports. Each of the four ports of 8255 can he programmed to be either an input or output port. No handshaking is required; data is simply written to or read from a specific port.

Basic functional definitions of Mode 0 are as follows:

Mode 1-Strobed Input/Output This is strobed input/output mode of operation. Only Port A and Port B both can be operating in this mode of operation. When Port A and Port B are programmed in Mode 1, six pins from Port C are used as control signals. These control signals are used for handshaking. PC0, PC1 and PC2 pins of PC lower are used to control Port B and PC3, PC4, and PC5 pins of PC upper are used to control Port A. The other pins of Port C, i.e., PC6 and PC7 can be used as either input or output. While Port A From is operated as an output port, pins PC3, PC6 and PC7 are used for its control. The pins PC4 and PC5 can be used either as input or output. The combination of Mode 0 and Mode 1 operation is also possible. When Port A is programmed to operate in Mode 1, Port B can also be operated in Mode 0. Figure 8.66 shows the timing diagram of Mode 1(input). 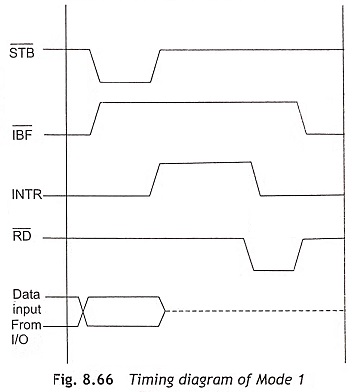 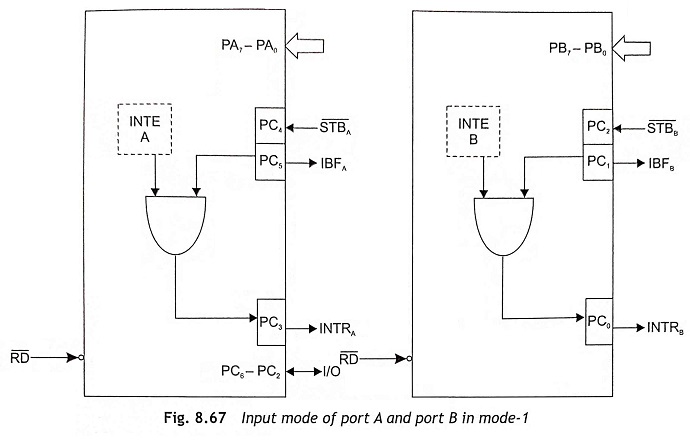 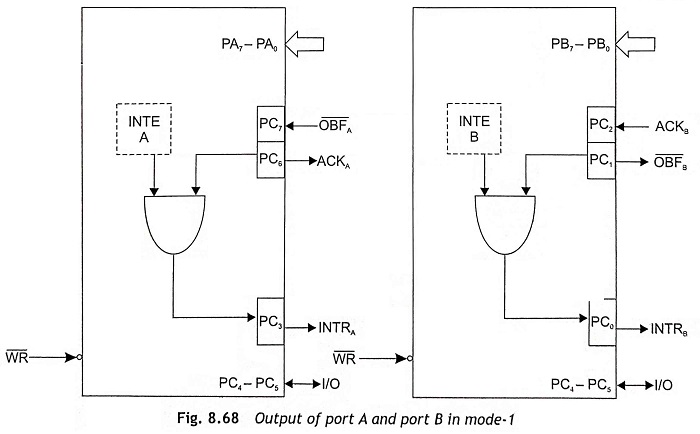 STB (Strobe Input) A low on this input loads data into the input latch.

IBF (Input Buffer Full F/F) A high on this output indicates that the data has been loaded into the input latch: in essence, and acknowledgment. IBF is set by S̅T̅B̅ input being low and is reset by the rising edge of the R̅D̅ input.

INTR (Interrupt Request) A ‘high’ on this output can be used to interrupt the CPU when an input device is requesting service. INTR is set by the conditions: S̅T̅B̅ is a ‘one’, IBF is a ‘one’ and INTE is a ‘one’. It is reset by the falling edge of R̅D̅. This procedure allows an input device to request service from the CPU by simply strobing its data into the port.

INTE A Controlled by bit set/reset of PC4.

INTE B Controlled by bit set/reset of PC2.

O̅B̅F̅ (Output Buffer Full F/F) The O̅B̅F̅ output will go ‘low’ to indicate that the CPU has written data out to be specified port. This does not mean valid data is sent out of the part at this time since O̅B̅F̅ can go true before data is available. Data is guaranteed valid at the rising edge of O̅B̅F̅. The O̅B̅F̅ F/F will be set by the rising edge of the W̅R̅ input and reset by A̅C̅K̅ input being low.

A̅C̅K̅ (Acknowledge Input) A ‘low’ on this input informs the 82C55A that the data from Port A or Port B is ready to be accepted. In essence, a response from the peripheral device indicates that it is ready to accept data.

INTR (Interrupt Request) A ‘high’ on this output can be used to interrupt the CPU when an output device has been accepted by data transmitted by the CPU. INTR is set when A̅C̅K̅ is a ‘one’, OBF is a ‘one’ and INTE is a ‘one’. It is reset by the falling edge of W̅R̅.

INTE A Controlled by bit set/reset of PC6.

INTE B Controlled by bit set/reset of PC2. 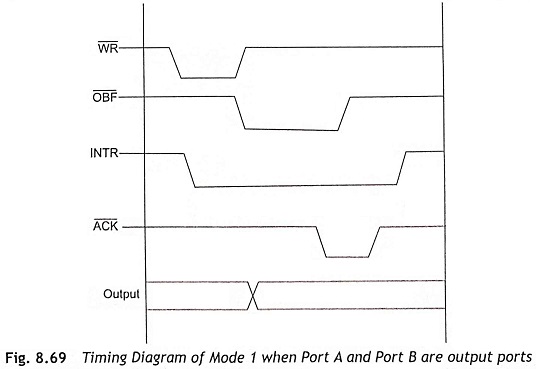 Mode 2-Bi-directional Bus This mode is strobed bi-directional of operation of port with input and output capability. Mode 2 operation is only feasible for Port A. Therefore, Port A can be programmed to operate as a bi-directional port. If Port A is programmed in Mode 2, Port B can be used in either Mode 1 or Mode 0. In this mode of operation, PC3 to PC7 pins are used to control signals of Port A.

The basic functional definitions of Mode 2 are 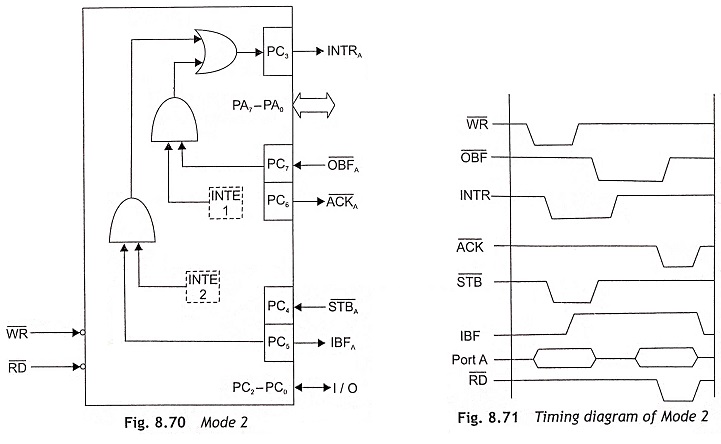 In this mode, any of the eight bits of Port C can be set or reset using a single output instruction. This feature reduces software requirements in control-based applications. 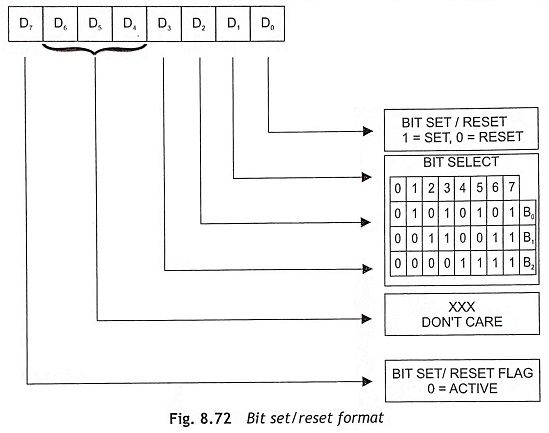 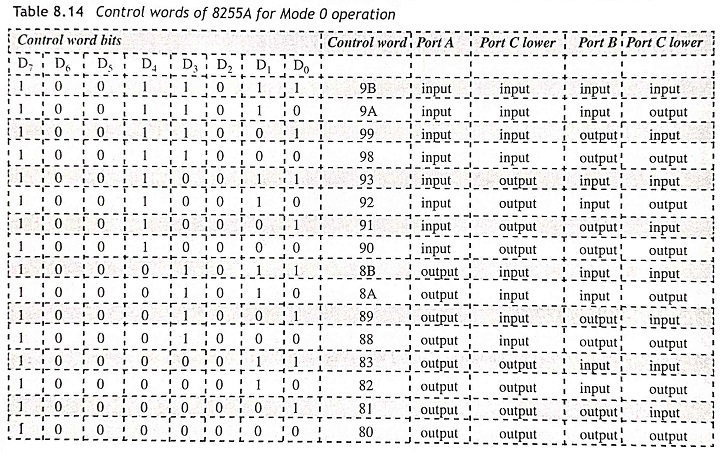 The 8255 PPI IC is a very powerful tool for interfacing peripheral equipment to the microprocessor-based system. It represents the optimum use of available pins and is flexible enough to interface almost any I/O device without the need for additional external logic.

Each peripheral device in a microprocessor-based system usually has a ‘service routine’ associated with it. The routine manages the software interface between the device and the microprocessor. The functional definition of the 8255 can be programmed by the I/O service routine and becomes an extension of the system software. By examining the I/O device interface characteristics for both data transfer and timing, and match­ing this information to the examples and tables in the detailed operational description, a control word must be developed and loaded into control word register to initialize the 8255 IC to get a specified operation. The typical applications of the 8255 are given below: