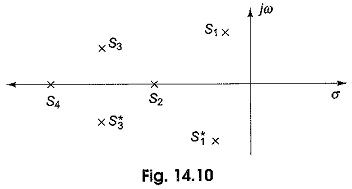 In Fig. 14.10 s1 and s3 are complex conjugate poles, whereas s2 and s4 are real poles. If the poles are real, the quadratic function is

where δ is the damping ratio and ωn is the undamped natural frequency.

The roots of the equation are

For these poles, the time domain response is given by

For these poles, the time domain response is given by

From the above equation, we can conclude that the response for the conjugate poles is damped sinusoid. Similarly, s3, s3* are also a complex conjugate pair. Here the response due to s3 dies down faster than that due to s1 as shown in Fig. 14.12. 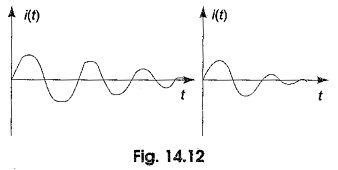 Consider a network having transfer admittance Y(s). If the input voltage V(s) is applied to the network, the corresponding current is given by

This may be taken as

where H is the scale factor.

By taking the partial fractions, we get

Any of the above coefficients can be obtained by using Heavisides method. To find the coefficient kl

Similarly, all coefficients k1,k2,….km may be obtained, which constitute the

The residues may also be obtained by Poles and Zeros of Time Domain Response in the following way.

The steady state response can be obtained from the pole zero plot, and it is given by

where M(ω) is the amplitude