Electrical Energy Definition states that energy is the basic necessity for the economic development of a country. Many functions necessary to present-day living grind to halt when the supply of energy stops. It is practically impossible to estimate the actual magnitude of the part that energy has played in the building up of present-day civilisation. The availability of huge amount of energy in the modern times has resulted in a shorter working day, higher agricultural and industrial production, a healthier and more balanced diet and better transportation facilities. As a matter of fact, there is a close relationship between the energy used per person and his standard of living. The greater the per capita consumption of energy in a country, the higher is the standard of living of its people.

Energy exists in different forms in nature but the most important form is the electrical energy. The modem society is so much dependent upon the use of electrical energy that it has become a part and parcel of our life.

Energy may be needed as heat, as light, as motive power etc. The present-day advancement in science and technology has made it possible to convert electrical energy into any desired form. This has given Electrical Energy Definition a place of pride in the modern world. The survival of industrial undertakings and our social structures depends primarily upon low cost and uninterrupted supply of electrical energy. In fact, the advancement of a country is measured in terms of per capita consumption of electrical energy.

Electrical energy is superior to all other forms of energy due to the following reasons :

The electrically operated machines have simple and convenient starting, control and operation. For instance, an electric motor can be started or stopped by turning on or off a switch. Similarly, with simple arrangements, the speed of electric motors can be easily varied over the desired

One important reason for preferring electrical energy is the flexibility that it offers. It can be easily transported from one place to another with the help of conductors.

Electrical energy is much cheaper than other forms of energy. Thus it is overall economical to use this form of energy for domestic, commercial and industrial purposes.

Electrical energy is not associated with smoke, fumes or poisonous gases. Therefore, its use ensures cleanliness and healthy conditions. 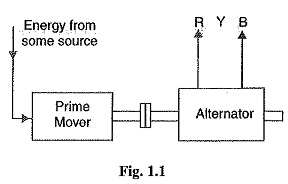 Energy is available in various forms from different natural sources such as pressure head of water, chemical energy of fuels, nuclear energy of radioactive substances etc. All these forms of energy can be converted into electrical energy by the use of suitable arrangements. The arrangement essentially employs (see Fig. 1.1) an alternator coupled to a prime mover.

The prime mover is driven by the energy obtained from various sources such as burning of fuel, pressure of water, force of wind etc. For example, chemical energy of a fuel (e.g., coal) can be used to produce steam at high temperature and pressure. The steam is fed to a prime mover which may be a steam engine or a steam turbine. The turbine converts heat energy of steam into mechanical energy which is further converted into electrical energy by the alternator. Similarly, other forms of energy can be converted into electrical energy by employing suitable machinery and equipment.